Essays That Will Make You Think on Every Page 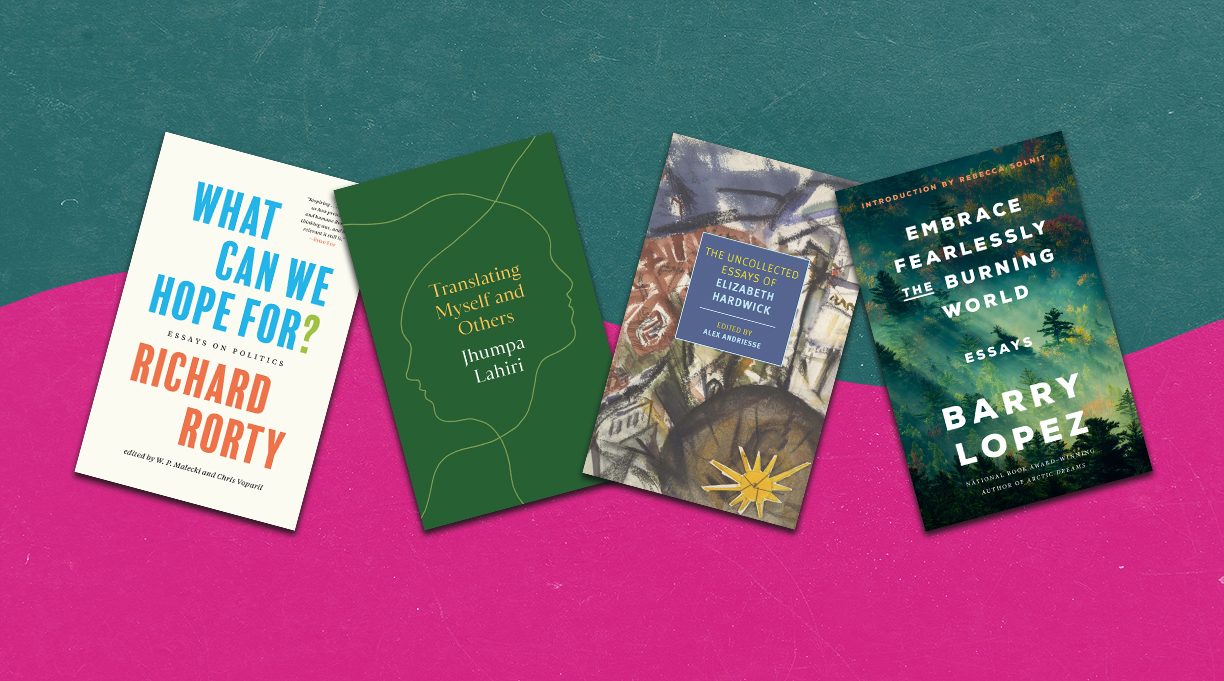 Summer reading is usually characterized by lighthearted, whimsical, or escapist material—the proverbial “beach read.” While I have no quarrel with beach reads or any kind of light reading, I always appreciate meaty, intellectually challenging books, especially essay collections by seasoned writers and thinkers. Before we jump headfirst into summer reading season, I’m taking the opportunity to recommend four sophisticated collections from writers who make you think on every page. All quotes are from the Kirkus reviews.

What Can We Hope For?: Essays on Politics by Richard Rorty (Princeton Univ., May 3): “If anyone deserves the mantle ‘America’s Orwell,’ it’s Rorty (1931-2007), who combined political activism and sharp observation with a fierce intellectual independence that allowed him to criticize both left-wing and right-wing ambitions. He also had a dependably Orwellian lack of faith that his fellow humans would rise up to defend democratic institutions if it involved sacrificing self-interest.…Of particular relevance are Rorty’s repeated observations on the effects of economic inequality, in the U.S. and worldwide, which he predicted would lead to resource wars and political instability. He also lands a strong point by noting that because Republicans are reluctant to discuss wealth inequality, they favor igniting skirmishes in a long-fought culture war.…Exemplary political writing by a renowned maverick.”

The Uncollected Essays of Elizabeth Hardwick, edited by Alex Andriesse (New York Review Books, May 17): “More essays from a master of the form. Hardwick’s essays have been getting a new look thanks to Cathy Curtis’ recent bio, A Splendid Intelligence, so editor Andriesse’s collection of 35 previously uncollected essays—published in Vogue, Vanity Fair, the New York Review of Books, and other publications—is well timed.…This judicious gathering is a fine place to sample Hardwick’s work.”

Translating Myself and Others by Jhumpa Lahiri (Princeton Univ., May 17): “A Pulitzer Prize–winning author of fiction in English, Lahiri moved to Rome in 2012 to immerse herself in Italian. Since then, she has published both a memoir and fiction in Italian and translated several works from Italian to English. This volume collects several pieces written over the past seven years—her translators’ notes to the novels Ties (2017), Trick (2018), and Trust (2021) by Italian writer (and friend) Domenico Starnone; stand-alone essays; and lectures and addresses—as well as an original introduction and afterword.…Possibly the most provocative piece is “Where I Find Myself”—on the process of translating her own novel Dove mi trovo from the original Italian into English as Whereabouts (2021)—an essay that finds her first questioning the ethics of self-translation (probed with a surgical metaphor) and then impelled to make revisions for a second Italian edition.…A scrupulously honest and consistently thoughtful love letter to ‘the most intense form of reading…there is.’ ”

Embrace Fearlessly the Burning World by Barry Lopez (Random House, May 24): “Collected essays from the 2000s by the eminent, late natural history writer.…Well aware of his impending death to a cancer undetected until it was too late, Lopez gets deeply personal, writing with clear eyes of that death as well as of the horrific experience of sexual abuse as a child. Altogether, the pieces are honest and searching, engaging readers in the largest of questions: How do we live in the world? How do we see it? How do we protect it?…A sterling valediction. Lopez’s many followers will treasure this book.”