On Ethnicity and Authenticity: 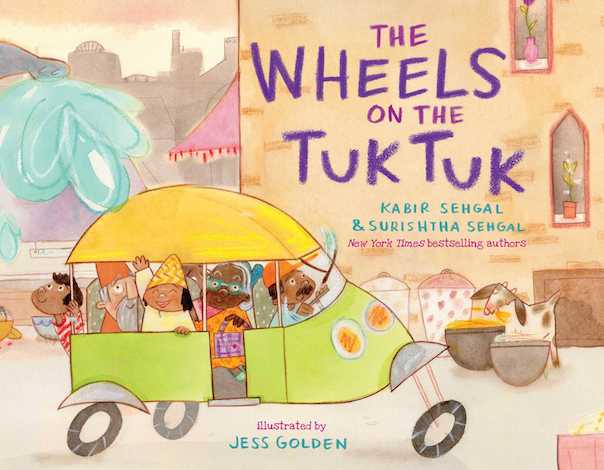 In this issue, you will find a review of a jolly little picture book called The Wheels on the Tuk Tuk, by Kabir Sehgal and Surishtha Sehgal, illustrated by Jess Golden. It’s an effervescent Indian riff on "The Wheels on the Bus." I assigned it for review to an expat Gujarati, thinking she would get a kick out of it. She did, but not without reservation. "Tuk tuk," she explained, is a not a word actual Indians use to refer to the three-wheeled vehicle in the book. Indians typically call it an "auto," short for "auto-rickshaw."

After some protest from the publisher, both my reviewer and I researched the matter further and discovered that apparently "tuk tuk" is making inroads, mostly in touristy areas, possibly brought by backpackers who encountered the term in Thailand. Still, we found that "auto" or "auto-rickshaw" enjoys far greater currency among Indians than "tuk tuk."

This has me thinking about this book's U.S. audience and how various segments will receive it. General, non-Indian readers will find it a delightful, curry-scented spin on an old favorite. Thai readers may be drawn by the title and then disappointed to find it's not set in Thailand. Librarians eager to bring diversity to their collections will leap on it—it's tailor-made for storytime. But what about Indian-Americans looking for books that will connect their children to their heritage?

Here's a book set in India that's built around a pretty major departure from common usage. Though it's impossible to know how the Indian-American authors came to embrace "tuk tuk," it's clear they did. But, like one of the expats my reviewer surveyed who remarked that he refused to use the term when offered a "tuk tuk" ride on a visit home, Indian-American readers may want none of it.

This episode put me in mind of another book I worked on recently, Kiki and Jacques, by Susan Ross. Though superficially, it couldn’t be much more different from The Wheels on the Tuk-Tuk—it concerns the burgeoning friendship between a Franco-American boy and a newly arrived Somali girl in a hardscrabble Maine mill town—it is marred by a similar misstep in ethnic authenticity. Jacques has been largely raised by his loving grandmother, whom he calls “Grandmère.” While this will not make most readers blink, it will cause Franco-American readers—children just like Jacques—to pull up short, as among this population, grandmothers are affectionately called “Mémère” (spelling may differ, but it’s pronounced meh-may), not the formal, French “Grandmère.”

It caused me no end of sadness to note this, as, goodness knows, there are few enough books about Franco-Americans on our shelves, and it was one factor that led to this line in our review: “Disappointingly, the vigor and distinctiveness of Jacques’ Franco-American culture is flattened, coming across as generically French.” Will Franco-American readers recognize themselves in Jacques, or will they be so distanced by the unfamiliar “Grandmère” that it will haul them out of the story altogether?

If, as I suspect, both choices were made to increase the appeal of each book to a general U.S. audience, I can understand it. Broader appeal means higher sales and, arguably, higher exposure of each ethnic minority to children unfamiliar with it. But the trade-off—potential alienation of the culture each book is about—seems tragic to me. If, as we keep saying in our calls for diversity in children’s literature, children need both windows and mirrors, isn’t it working against that goal to give them books that are not truthful to those diverse cultures?—V.S.