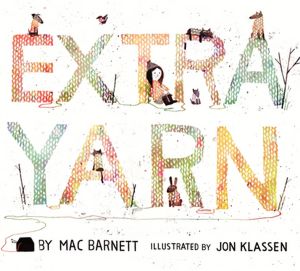 I have no doubt that Mac Barnett is usually this happy. But I bet these days he has an extra skip in his step.

That’s because Extra Yarn, published by Balzer + Bray and illustrated by Jon Klassen, was awarded the 2012 Boston Globe-Horn Book Award in the Picture Book category.

Extra Yarn, in case it’s flown past your radar this year, tells the story of Annabelle, a girl who finds a “box filled with yarn of every color.” Annabelle lives in a cold town where “everywhere you looked was either the white of snow or the black of soot from chimneys.” She takes the box and knits herself and her dog a sweater. Eventually, she’s knitting for all (furry or otherwise) in town, never running out of yarn. Word spreads fast and far about this remarkable girl.

When an archduke, complete with a twitchy mustache, shows up in town to buy the box of yarn from her and she turns him down, he hires three robbers to break into Anabelle’s house and steal the box.

However, when he then sits down in his favorite chair, puts on his favorite song, and lifts the lid off the box, he’s in for one ugly surprise, one that makes his very mustache quiver.

This book, further evidence that Barnett is one of children’s literature’s most exciting new talents, is the perfect fit for illustrator Klassen, who was awarded a 2012 Theodor Seuss Geisel Honor for I Want My Hat Back, also a tale of gluttony. Thievery is bad, m’kay?

What, in particular, prompted this story?

I saw an illustration Jon did in college: a girl was walking her dog and they were wearing matching sweaters. I loved the piece, and as soon as I saw it, I starting thinking up Extra Yarn. The illustration in the book where Annabelle walks Mars is very close to the one that started it all.

Tell me what it was like to see Jon's art for this book for the first time.

Because I knew I wanted Jon to illustrate the book, I was able to sort of write a story in his world, or in the space where our worlds overlap. When I saw his art, it felt just right, like pictures from a book I'd loved as a kid and then forgotten about.

This might not be the world's most incisive question, but I find myself wondering, after reading reviews of your books, if are you used to being called "quirky" yet? What do you think it is about your writing that makes people say that?

Last month on the radio, I heard a winemaker talking about how his business had changed, starting in the 1980s. Before that, apparently, vintners took pride in the idiosyncrasies of their individual processes and the quirks of their regions. You could take a sip and know that the grapes were grown in this particular terroir, say, and there was such wide and pronounced variety that you could tell the differences between two wines grown 30 miles from each other.

But then that changed. Winemakers started aiming for received notions of the perfect Bordeaux or ideal Cabernet, and things started tasting the same. And this man on the radio was sad, because something had been lost.

Now, during the Reagan years, I was too young to even taste the holy swill in the Communion cup, but I see a similar trend in picture books—and on roughly the same timeline. The same plots get trotted out. Great ideas are shaved and sanded down until they look a lot like a lot of other things on the bookshelf. I like strange stories, shaggy stories, stories with knobby bits and gristle and surprises. And so I'm glad that people think my stories are quirky. All my favorite books have quirks. Although I think it is almost always more interesting to examine why something is quirky than to simply say that it is.

I've been in Alaska for a while, and I forgot to pack a razor, so right now I'm working on my beard. And I'm learning bear safety. The other day, near Anchorage, a bear attacked a woman, but he couldn't eat her, because one of her green Crocs sandals got stuck in his throat. This bear needs to become the new spokesman for Crocs. I'm working on making that happen.

But also the fourth Brixton Brothers comes out this fall.

What exactly is the archduke's favorite song?

A kid asked Jon and me this a few months ago. I guessed Rachmaninoff. Jon thought something more baroque.

Although maybe the archduke loves the Isley Brothers. He has a flair for the unexpected.

Illustrations from EXTRA YARN are copyright © 2012 by Jon Klassen and used with permission of HarperCollins.

Julie Danielson (Jules) has, in her own words, conducted approximately eleventy billion interviews and features of authors and illustrators at Seven Impossible Things Before Breakfast, a children's literature blog focused primarily on illustration and picture books.