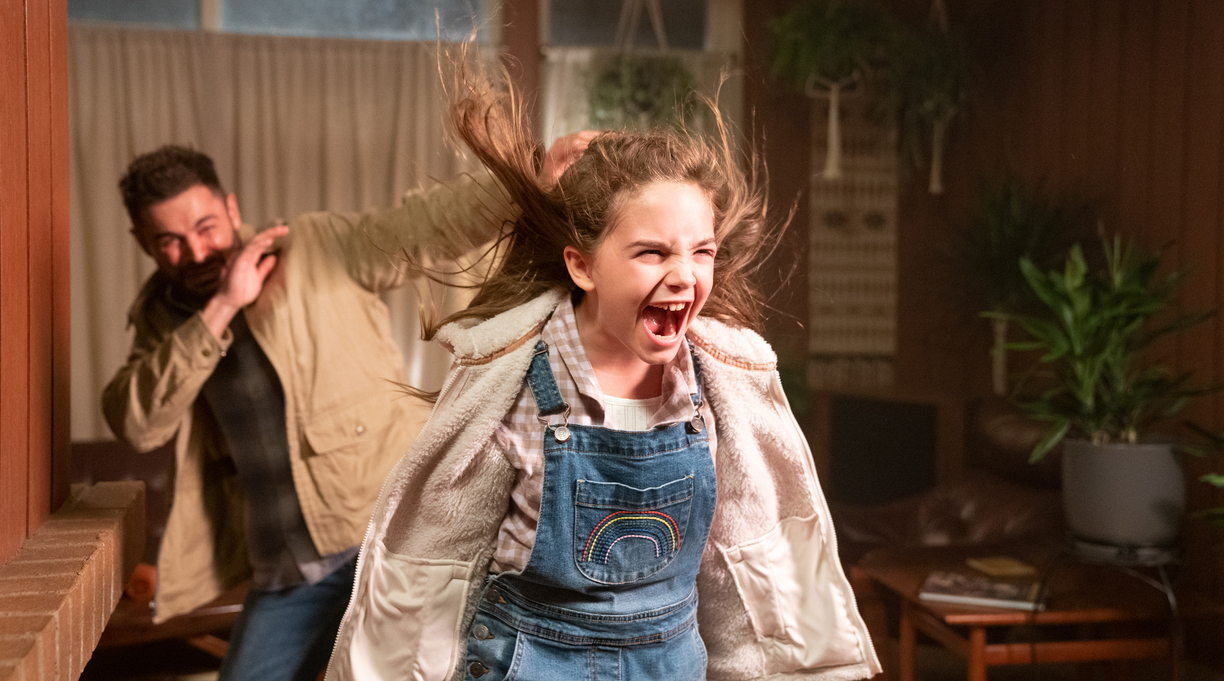 When Stephen King published Firestarter in 1980, he was in the midst of a run of classic horror novels that began with 1974’s Carrie. Like that debut, Firestarter is effectively a dark superhero origin story about a girl with terrifying psychic powers. Eight-year-old Charlene “Charlie” McGee has a unique ability, indeed: She can set things aflame with the power of her mind.

It’s soon revealed that Charlie’s father and mother, Andy McGee and Vicky Tomlinson, volunteered for a scientific study when they were college students. They were given a drug called Lot Six, which gave them unusual abilities: Andy gained the power to “push” people—to convince them of anything he desired, or even force them to do things; Vicky received some mild telekinetic ability, and both gained the ability to communicate telepathically. They later married and had Charlie, who was born with her fire-starting power and, as she grows up, only has a modicum of control over it. Andy and Vicky tried to keep the family’s powers a secret, but they got on the government’s radar, nonetheless; now they’re being pursued by agents of an organization known only as the Shop, including an unstable assassin named John Rainbird. As the novel opens, Vicky has already been murdered, and Andy and Charlie are on the run.

The book was made into a rather faithful 1984 movie adaptation, directed by Roller Boogie’s Mark L. Lester and starring a young Drew Barrymore as Charlie and a very good David Keith as her dad. A new film, starring Ryan Kiera Armstrong and Zac Efron, attempts to fire things up with a few changes to the source material, but it ends up generating very few sparks. It’s now in theaters and premiered on Peacock on May 12.

The opening of the new adaptation isn’t very promising: Instead of starting with Shop agents in hot pursuit of Andy and Charlie on the streets of New York, it blandly begins with Andy having a dream of the infant Charlie in her crib. Once he’s awake, the plot takes a while to get going; Andy, Charlie, and Vicky (the latter played by Helstrom’s Sydney Lemmon) are living in suburbia, hiding from the Shop. Andy works as a life coach, while Charlie goes to public school, where her control of her power is clearly slipping; she eventually wrecks a bathroom with her torching ability when she can’t get her emotions under control. This finally draws the attention of Rainbird (creepily played by Rutherford Falls’ Michael Greyeyes), kicking the story in gear at last.

At this point, it briefly feels as if the narrative is branching into new and different territory, as it’s revealed that Rainbird—an ordinary human in the book—has Lot Six–generated psychic powers of his own, and it’s implied that there are a number of other superpowered folks. Not much comes of this twist, although later, the filmmakers decide to give Charlie additional powers—which effectively undermines the title of the movie itself; isn’t fire-starting enough? An unintentionally laughable scene involving Charlie and a stray animal, featuring poor special effects and some questionable acting choices by Efron, will make many viewers question why this new adaptation even exists. Indeed, the film, directed by The Vigil’s Keith Thomas and written by Halloween Kills’ Scott Teems, generates very little suspense, and the actors never seem to emotionally connect with the material. And aside from a few moments here and there, the pyrotechnics—the fires that are started—are surprisingly and disappointingly unimpressive.

Indeed, the hottest element of the film is the score, which was co-created by acclaimed director John Carpenter and has the same snappiness and menace as his legendary music for Halloween. (Anyone hoping for a needle-drop of the Prodigy’s 1996 rave-up, though, will be sadly disappointed.) Overall, fans of the novel may wish to simply revisit the ’80s film, which features engaging performances by Barrymore and Keith and ends in a satisfyingly massive firestorm. Better yet, they might simply enjoy a reread, as King’s original still packs plenty of heat, more than 40 years on.