Girls Don’t Always Wear Dresses, and Boys Have Eyelashes Too 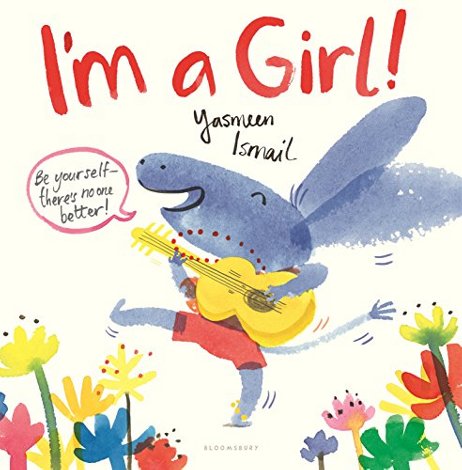 How can readers tell which of Quentin Blake’s Three Little Monkeys is Lulu, the sole female? Easy: Illustrator Emma Chichester Clark paints her with a bow in her (very short) hair. How can readers tell which tool in Joan Holub’s Tool School is a girl? Easy: It’s the screwdriver; illustrator James Dean has given her eyelashes. How can readers tell the female peas from the male peas in Keith Baker’s LMNO Pea-quel? Easy: They’re the ones with the ponytails. How can you tell the girls from the boys in just about any classroom scene in picture books? Easy: The girls are the ones in the dresses and skirts (and with bows, eyelashes, and ponytails).

It’s dismaying to realize how very dependent both illustrators and readers of picture books are on stereotype to understand characters’ genders. Yasmin Ismail directly attacks all of these stereotypes in I’m a Girl!,in which her young donkey protagonist proudly declares her femininity while presenting so masculine she’s often called “young man.” It should not be a necessary book.

I do get why illustrators lean on these stereotypes: They are a quick and easy way of delivering critical information, and because they are stereotypes, everybody recognizes them. But can’t we do better? Mo Willems depicts his feminine protagonist of Hooray for Amanda and Her Alligator in a way that would not lift eyebrows if the title of the book were instead Hooray for Alberto and His Alligator. In Shirley Ng-Benitez’s illustrations for the Confetti Kids books, she routinely dresses female characters Mei, Padma, and Lily in shorts and pants, as when they get together with male friends Henry and Pablo for a day in the park in Want to Play?, by Paula Yoo. Likewise, Chris Sheban chooses to illustrate the little girl in Patricia MacLachlan’s Someone Like Me with short hair and wearing jeans. Good on them.

Now, Willems is in total control of his text and illustrations, so he can take his vision where he wants. I also get that both MacLachlan and Yoo (and Yoo’s series collaborator, Gwendolyn Hooks) provide Sheban and Ng-Benitez with text that explicitly tags these characters as female, while more and more picture-book texts do not. The stereotypes are positively virulent in this category of books with no gender indicated in the text, but they need not be. Another recent book by MacLachlan, Barkus, has a protagonist named Nicky who is not referred to with a pronoun. Illustrator Marc Boutavant elects an androgynous approach, giving Nicky a pageboy and dressing them in jeans and a T-shirt. How readers of any gender imagine Nicky is up to them.

I say hurrah to all illustrators who leave behind tired, illogical stereotypes and create both girls who accurately reflect the full range of real-world girl expression, and characters with whom gender-nonconforming boys and genderfluid children can identify. Why is this a big deal? Because in continuing to rely on the lazy shorthand these stereotypes foster, we do not help our children to grow up with a full and flexible understanding of the many ways that gender is experienced and expressed, an understanding that is necessary in a real world that is a whole lot more complicated than dresses, bows, ponytails, and eyelashes.