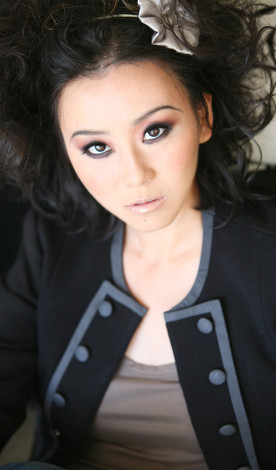 Conceived from a union of mental invention and keen observation, a manuscript begins with a spark. Through weeks, months, years, it gestates. Unforeseen alterations transpire—expansions here, reductions there—and after days of nervous anticipation and nights of potent coffee, it is born. Is it a golden child of vigorous praise? A bad seed destined for shadows? Or is it both?

Marie Lu’s debut book, Legend, is arguably of the golden persuasion. It scored accolades from critics, garnered then survived media hype and ultimately evolved into a trilogy. With the finale, Champion, set for release a few days from now, ends are being tied in the meticulously realized, action-packed world Lu has created. There are likely requisite nervous knots that come with hoping to meet the final expectations of fans, editors, publishers and agents, but what is it really like to say goodbye?

Unless it’s to houseguests with no boundaries or a Form 1040 en route to the IRS, bidding farewell generally isn’t sunshine and daisies. “It’s definitely emotional in weird ways,” Lu says. It’s the day before her book tour begins in Los Angeles, and we’re chatting from opposite coasts. She sounds cool, friendly, precise and not at all freaked out that a huge part of her life has reached The End. “A part of me is really relieved because I’m like, ‘Oh my god, I managed to finish it without killing myself or without disappointing my publisher.’ It’s a little bit of a relief because you feel like you’re sending your kids off to college, and they’re off to mingle with the public, and my work is done. But it’s also kind of sad because it feels like the empty nest….It’s this weird mix of blissfulness that I’m left with at the end.”

Bliss is something Lu has likely become well-acquainted with while spinning the Legend trilogy. On top of her critical and commercial success, CBS Films holds the rights to Legend. If a film project were given the green light, would she cringe at the thought of character-butchering or just enjoy the potentially fruitful Hollywood ride? “Translation to screen is such a tricky thing, and I’m always amazed that it can even happen at all,” Lu says. “For Legend, I always told myself, as long as the characters and their essences stay intact, I really don’t mind if they have to change the plot around.”

Day and June are the trilogy’s two central characters. Day is a rebel-cum–high-ranking military figure of hope, and June is a brainiac-turned–government darling. Their stories intertwine in the Republic, Lu’s realization of a tumultuous future where classes rumble and corruption is pandemic. As in the previous books, Champion’s first-person narrative alternates between the two starkly different characters. Is flip-flopping any easier by Book 3, or is there still mental turbulence? “It was definitely a lot smoother than when I first started writing Legend,” Lu says. “With Legend, I had a lot of trouble getting into June’s head. In Champion, it started to come a little bit easier. June was starting to change a little bit as a character, so she doesn’t speak in as many analytical parentheses as she does in Legend and Prodigy. Her changing personality has started to appear in her chapters as well.”

Perhaps the increased ease also came from the music used as a creative lubricant. Lu has posted playlists for Champion’s two older siblings, so I ask what was in stereo while Lu wrote the baby of the family. “Mad World” is the song that sticks with her, “because I feel like it fits with the general idea of the Republic,” Lu says. “And then ‘Do You Hear the People Sing?’ from the Les Misérables soundtrack; I put that one in because the song really fits with the revolution and people standing up for their rights and also because it hearkens back to the origins of Legend. I came up with the story of Legend from watching a Les Mis movie, so I felt like I had to put in my playlist some song from the Les Mis soundtrack.”

In her acknowledgments, Lu mentions a heart’s protected, golden space and the hope that one of her books can hold that coveted space for readers. But surely there’s a character for whom Lu has a protected golden space? “The book that I read when I was a kid that really led me onto the path of permanently being a fan of science fiction and fantasy was the Redwall series by Brian Jacques,” says Lu. “It’s basically set in this fantasy world populated by mice and squirrels and what have you, and every year, there are these invading hordes of wild cats that are trying to take over their little abbey, and they have to defend themselves.” She calls the concept behind Redwall “adorable.” The one character that stuck out to her is the mouse named Mattimeo. “He was so spunky and optimistic and mischievous,” she says. “I’ve always liked those spunky characters. I think that may have been the first character I ever read who was like that.”

As the Legend trilogy concludes, Lu has something else of importance on her horizon: marriage. “We got engaged earlier this year, and I have a blue sapphire ring. Sapphire is one of my favorite stones,” she says. “I would love a paper clip ring, though.” Paper clip? That’s right. Just read the book, and you’ll understand the sentiment.

Gordon West is a writer and illustrator living in Brooklyn. He is admittedly addicted to horror films and French macarons.