Telling Kids All About ‘The Greatest’ 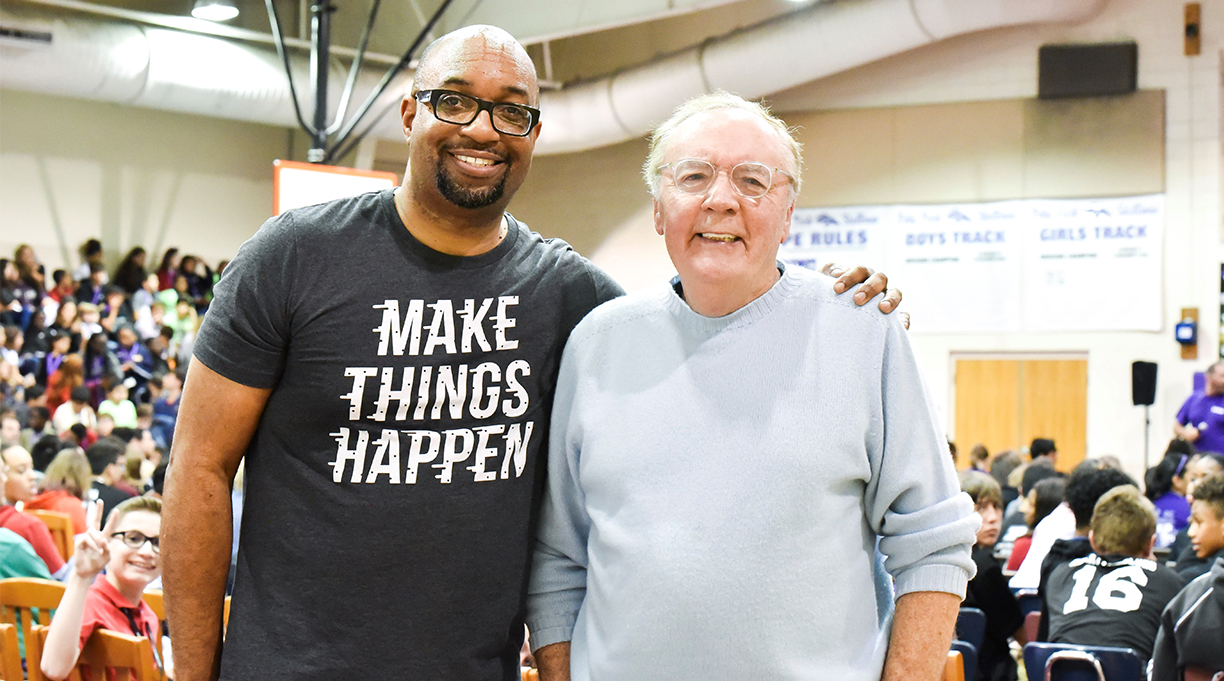 When the estate of Muhammad Ali approached James Patterson about writing a children’s book on the boxing legend, there was one writer he knew he wanted to work with: Kwame Alexander, Newbery Medal–winning author of The Crossover and many other titles for young readers. Patterson, of course, is a mega-bestselling author, publisher, and philanthropist—he recently donated $2.5 million to schoolteachers—known for his wide-ranging collaborations with Bill Clinton, Maxine Paetro, David Ellis, and others. But Alexander, whom he met at the Palm Beach Book Festival in 2018, was the right one for this job. “I knew that Kwame had been tremendously affected by Muhammad Ali’s autobiography,” says Patterson, referring to The Greatest, published in 1975. The result of their partnership is Becoming Muhammad Ali (JIMMY Patterson/HMH Books, Oct. 5), a lightly fictionalized account of young Cassius Clay’s childhood in Louisville, Kentucky, with illustrations by Dawud Anyabwile. Patterson, in Palm Beach, and Alexander, in London, joined me on Zoom to discuss the book; our conversation has been edited for length and clarity.

Why a children’s book about Muhammad Ali?

James Patterson: Originally, the [Ali] estate approached me because they were familiar with the Max Einstein books that I’ve done with Chris Grabenstein, and they said, Would you be interested in writing about young Cassius Clay in Louisville? I started reading about his life, and I was impressed by how smart he was as a kid. He was so focused. He would never drink soda because he thought sugar wouldn’t be good for you, he wore heavy boots to build up his legs, he used to race the school bus, all these things to focus. I’m going to be great, I’m going to do something terrific.

Kwame Alexander: I got a call from someone at the JIMMY Patterson imprint—“Jim would love to talk to you about working on a project.” And when Jim told me that he wanted to do something about Ali’s childhood, it just made perfect sense. Jim’s approach was, “I want to tell the story about him as a kid, because I want kids to relate to the fact that he wasn’t that good in school.” Ali was quite smart, but they didn’t diagnose dyslexia back then. Jim wanted to talk about the challenges that [Cassius] faced as a kid, how he was resilient, how he became Ali.

There are prose sections narrated by Cassius’ friend and poems in Cassius’ own voice. What were the mechanics of collaborating on a book like this?

KA: Jim is a master plotter, and his outline was arguably about the size of one-fifth of the book. His outlines are pretty thorough, so we’re going to have this map of where we’re going. And that’s really exciting for me.

JP: But we also mess with the outline a lot, which is really good.

KA: Once we had the outline done, you know, the 30 or so pages of it, we just took off. For me, the exciting thing was how to imagine some of the things we just didn’t know from our research—how to imagine those in an authentic way.

JP: Kwame did a lot of listening to tapes, a lot of memories that people have.

KA: I want to say it was somewhere between 10 and 15 hours of oral history tapes that have not been released yet by the Muhammad Ali Center. Lonnie, Ali’s wife, made it possible for us to have access to those. And those were essentially oral history tapes of Ali’s friends growing up. That was invaluable.

I love the portrait of Louisville’s West End in the 1950s, the neighborhood and the characters in it, the little details like the woman who puts her television in the window so people can watch the prizefights that are broadcast. How did you get a feel for the place and the time?

KA: I tried to get you to come with me! Maybe next time.

JP: Actually, my best friend is from Louisville, so he had some insights, which was helpful. But Kwame, he was there hanging around.

KA: I spent a long weekend and stayed in the Muhammad Ali Suite at the Brown Hotel. It has all his

memorabilia in it. On Saturday morning, I went to the pink house on Grand Avenue, where his family moved in a year or so after he was born. I’m walking around back, looking in the glass in the back door, and see this framed poem that Ali wrote after the Olympics—it just is so inspirational. I look at the backyard, I see that back alley where the kids rode their bikes. I come back around, I see an older Black man and a Black woman sitting on their porch [next door]. I go up and I sort of wave through the gate, and he comes over. I tell him my name and about the book. OK, he doesn’t know who I am, but then I mentioned James Patterson, and he let me in [laughs]. It’s Mr. Montgomery; Cassius used to babysit their kid. So he ends up talking to me for like an hour.

The book comes at a really interesting moment in our American conversation about race.

JP:What’s going on this summer—we’ve seen things like this before. And we’ve always hoped that, OK, now we’re going to move things forward. One of the things that needs to happen is what happened with this book on a very small level, which is a Black man and White man get together, hope that they can write a beautiful book about a beautiful human being. That’s at least a piece of it: We need to get together and move things forward.

KA: I think it’s a big piece. We’re writing about a man who believed in and fought for equity, social justice, racial justice. And the mere fact that we did this book together is a testament to that. You know, I had friends who were like, You’re working with James Patterson? The implication was that it’s odd. It’s an odd thing that the two of you all would have something in common. And I posit that we have more in common than we are different.

JP: When we’ve gotten together in front of schools, we don’t think about it, we don’t talk about it. The kids just go, That was fun, that was interesting. And that’s the way it should be.

KA: The reality is that, in America, in this world, in my estimation, White privilege is a real thing. And people of color in general, Black people in particular, we need allies. We need people who believe in the full humanity of all of us. And so the more this kind of thing happens, the more it presents itself as a model for how the world should be.