Editor of THE FIRE THIS TIME 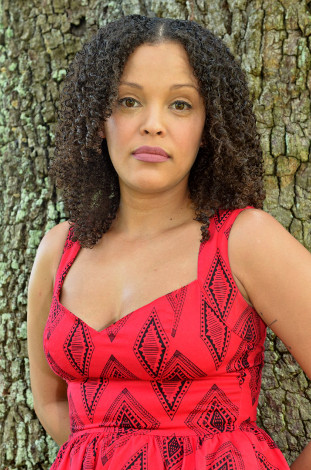 A powerful new anthology aims to channel the spirit of James Baldwin’s sharp eye and sharper pen, turning them on current events from Trayvon Martin to Sandra Bland. In The Fire This Time: A New Generation Speaks About Race, Jesmyn Ward has collected 18 essays and poems by contemporary authors that bring Baldwin’s tradition to the present day.

Ward says she saw glimpses of acuity like Baldwin’s in social media posts but longed to bottle it up. “There were so many writers on Twitter who had such great ideas and really insightful things to say about what was happening,” she recalls. “Then after two days I didn’t have access to those ideas anymore just because of the way that particular social media platform is structured. I wondered where I could go in order to encounter that kind of thoughtfulness about race in America.”

Ward found that Baldwin’s words, despite the passage of time, still directly addressed much of what she was experiencing in the present. “He’s such a singular voice,” she explains. “I find myself turning to his work again and again…and I’m continuously surprised at his bravery and his fierceness.”

Inspired, Ward decided to assemble contemporary voices in an anthology to reflect upon the frustration, anger, and fear so many experienced in the wake of Martin, Bland, Philando Castile, Alton Sterling, Tamir Rice, Mike Brown, and so many other black lives lost. She discovered and even reached out to many writers via Twitter—Kima Jones, Daniel José Older, Clint Smith, and Rachel Kaadzi Ghanash among them. Others, like Isabel Wilkerson and Claudia Rankine, she knew from print. She wanted to bring this panoply of voices—their eloquence, courage, and poignancy—to the pages of a single, durable volume.

Ward hoped that, bound together, their words could last, delivering community and solace to readers old and young, far and wide. In the introduction, she describes imagined readers—a rural Missouri girl and a black boy in the California desert—reading the text.

“Because I feel like they need it,” she explains. “I can imagine what a book like this would’ve done for me when I was growing up here in rural Mississippi feeling very isolated in my grappling with the history of race and racial disparities. I think that finding a book like this would have meant the world to me, because I think it would’ve made me feel a little bit less alone.”

Indeed, the writers’ distinctive takes on race, and the varied writing styles collected in the anthology have much to offer a range of readers. The spare, affecting poetry of Jericho Brown opens the volume. Edwidge Danticat’s heart-rending meditation on past police brutality (Abner Louima, Amadou Diallo, Patrick Dorismond), the present heartache, and the urge to be optimistic ends it. In between are variations on the themes of mourning, grief, funereal protest, and persistent, if wary, hope.

“I believe in the power of the written word,” Ward muses. “I believe that the stories that we tell each other can help us through our lives. I feel that especially with young people, who may feel like they’re butting up against massive, entrenched, awful things that are intent on burying them. I want them to feel a little less alone; I want them to feel just a little bit of hope.”