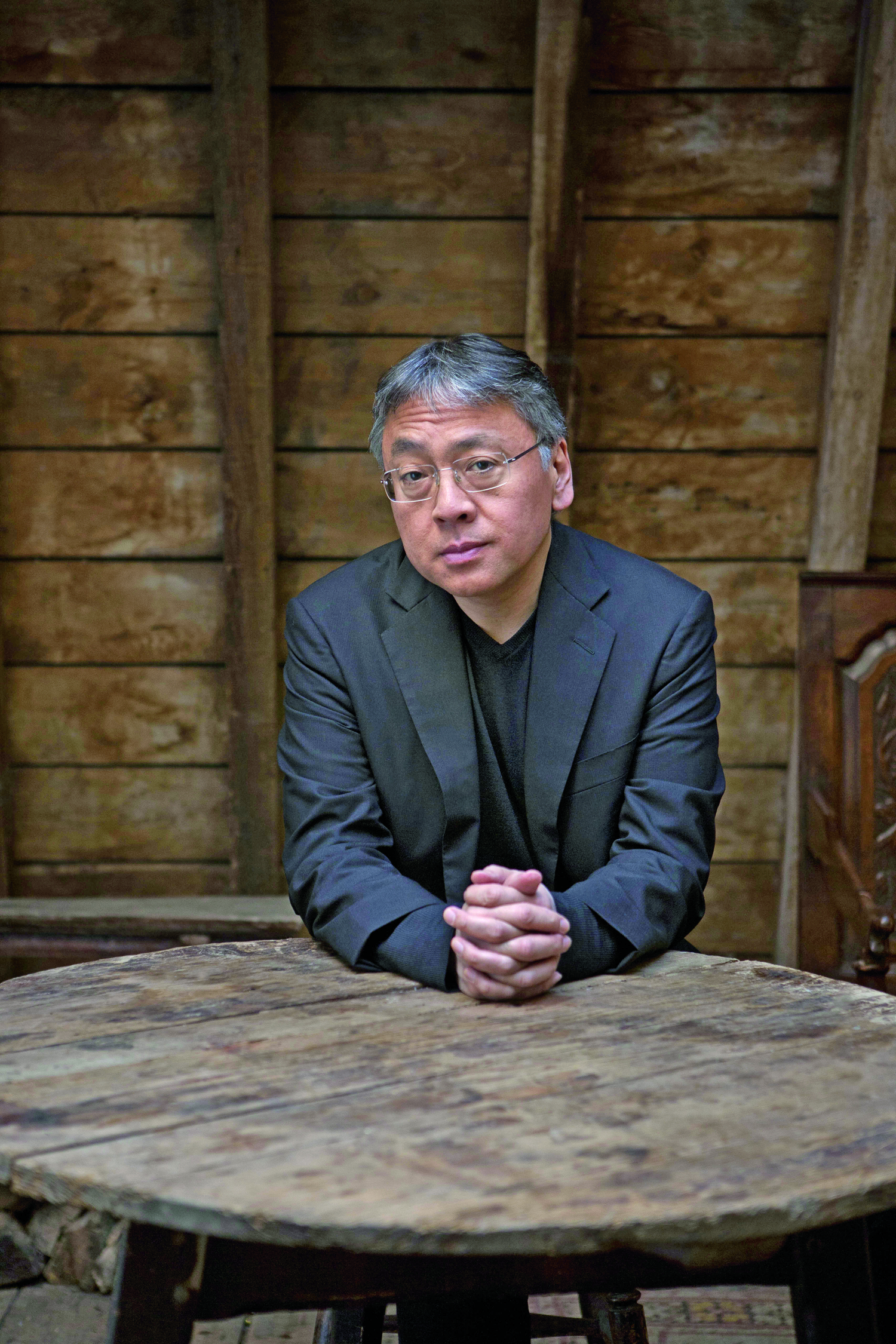 An epic journey, a mysterious quest. The land is shrouded in mist. The people’s memories are similarly clouded, as if by design. There are ogres in the woods and dragons in the mountains—and enemies everywhere.

In lesser hands, that scenario might have become another Tolkien knockoff. But as told by the eminently practiced, genre-jumping storyteller Kazuo Ishiguro, it’s a grand allegory of human history. And more plainly than all that, Ishiguro says from his home in London, it’s “a Western of a kind.”

Ishiguro’s latest novel, The Buried Giant, is set in gloomy, tumultuous fifth-century Britain. The Romans have been gone just long enough to leave some imposing ruins behind them, but now the native Britons have a new foreign presence to contend with: the Saxons.

Against that setting, Ishiguro imagines an old couple, Axl and Beatrice, who live out on the edge of the troubled world. They have tucked themselves away deliberately, it seems, in a community of Britons who live, like prairie dogs, in burrows where they can spot trouble and hide from it quickly. It’s a strategy that promises to end badly, but Axl has other things on his mind: as old people will, he has been remembering better days gone by, his dreams punctuated by visions of a woman with flowing red hair. Or are they dreams after all? His fellow burrow people are of no help, for even if they could put a name on her, or on the other people who had slipped away from them, or on the events that had shaped their lives, they would not speak of them: “in this community,” Ishiguro writes with deceptive simplicity, “the past was rarely discussed.”

With Beatrice, Axl sets off on a quest in search of that dream woman and the world he had once known, long receded in a mist both real and metaphorical. It soon becomes evident that Axl is more than just a philosophically minded old-timer, just as the boatman who turns up at points is—well, more than just a boatman.

As the story unfolds, Axl finds himself in the company of a warrior named Wistan, who is himself given to say such things as “the trees and moorland here, the sky itself seems to tug at some lost memory,” and in time of Sir Gawain, late of the Round Table and the glorious age of King Arthur, who would not have been happy to see his country full of people speaking German.

A she-dragon named Querig comes into the picture, and so do those ogres, more dreadful in the imagining than in the flesh. Indeed, the most dreadful aspects of the story come as warriors confront the things they have done—“I was but a young knight then,” one says, brushing away evidence of bad behavior, while another worries that a younger knight is not sufficiently full of hatred: “We’ve a duty,” he urges, “to hate every man, woman and child of their blood,” a duty fast forgotten in a time when peace seems at hand.

Born in Japan but resident in Engl

and for more than half a century, Ishiguro knows a thing or two about what it means to be a stranger in that strange land. But something else was on his mind when he began writing his story in 2001, a year when horrible events were closer to hand than usual. You can look high and low for the words “ethnic cleansing,” “Bosnia,” “terrorism,” “the Middle East,” or “Rwanda” in The Buried Giant, and you’ll come up empty. Still, Ishiguro says, those matters of unfortunate historical fact were much on his mind. “How do people,” he wonders, “who live among each other, who babysit each other’s children, who share their lives suddenly turn on each other?” And just as important, how do they ever come to think that their behavior is right?

It took him many years to wrestle the story down. “This has been a long, long time in becoming a book,” he says. “I can date the beginning precisely.” In 2001, he was in Japan giving a talk and someone asked what he was working on next. “I described a novel very much like The Buried Giant—but I didn’t have the setting. I hadn’t placed it yet in ancient Britain. It took me a long while to find the proper venue for the story I wanted to tell.”

And why ancient Britain? For a simple reason, Ishiguro says: namely, “there is no historical consensus about what happened between 410, when the Romans left, and about 500. There is a great gap in the historical record—the Romans were very careful chroniclers, but once they left, we have nothing except a generally shared opinion that some sort of genocide occurred involving the Saxons, the English, and the Britons.”

That lack of historical consensus allowed Ishiguro free rein to imagine what might have happened without being accused of breaching known fact, aside from the dragons, that is. It also gave him room to write at length of not just the horror of war and the awfulness of battle in a time of broadswords and arrows, but also of what people would have done after the fact of genocide: then as now, they would have tried to forget what they had done and seen, would have whitewashed events to place the losers on the side of wrong, but mostly would simply have avoided s peaking of late unpleasantries. The premise of a nation made up of forgetful people longing for meaning is beguiling, and it’s one that Ishiguro dwelled on for a long time.

“I had to work it out,” he says. “I had to really think about how individuals struggle with memory—and then, in the larger view, how whole nations reconcile the past. As I told the audience in Japan, I’d already written a number of books about individuals struggling with memory, and so imagining how societies got to that same question seemed the right thing to do next.”

Societies do so—as, Ishiguro points out, in the case of Americans and the Indian Wars or Britain and the acquisition of its empire—by romanticizing and mythmaking and by “burying really dark memories.” Just as often they do so by allowing a historical amnesia, that mist of which he writes, to obscure the view—our view.

Much of the drama attendant in The Buried Giant comes as Ishiguro lets a detail slip out here and another there until we have a clear picture of what in fact did happen, horrible though that they may be; the mist retreats, in large part, because he has allowed in the air that drives it away.

And without that air, to mix an image, then no wound ever heals. “Take my other country, Japan,” he says, “where there seems to be a strange amnesia about the second world war. That continues to cause problems in the relations with China and the nations of Southeast Asia today. It’s a difficult question: should the country take a good look, or should it leave all that past behind? It’s the same with your country. It’s the same with any country. The mist is the propaganda, the slanted history books, popular culture, all the rest of it.”

That’s a lot of meaning, a lot of vexing questions, to pack into what on the face seems a fairy tale for grown-ups—and small wonder it has taken Ishiguro so long to put it down on paper. But then, Ishiguro remarks wryly, it takes him years to write most of his books. His 2005 novel Never Let Me Go is one that “many people now classify as a dystopian novel, even a science fiction book. But it was very well along before I settled on the idea of putting the story in a world where there are clones,” he explains. “I had the idea long before of something that was killing people when they were very young, and I went quite some distance in telling a story about young people whose lives were shortened before I got to organ harvesting, instead of some other strange reason for why that was going to happen—perhaps a disease, perhaps contact with nuclear materials, or the like.”

So post–Arthurian Britain it is, dragons and all. From a reader’s point of view, Ishiguro’s years of effort are well-met, though what lies beneath the surface of his deceptively simple tale is just the beginning of a story that implicates all of humankind.