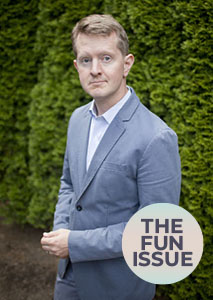 “This book is mostly Twitter’s fault,” says Jennings, author of Planet Funny: How Comedy Took Over Our Culture, a sidesplitting, brow-furrowing cultural criticism of comedy’s ubiquity in America today. He likens the snappy social network to a “comedy gym” where you can hone your technique with real-time feedback from “club pros” (i.e., professional comedians and comedy writers).

“You’ve got hundreds of them kind of helping you figure it out,” says Jennings, who has 285,000 followers (and counting). “The sheer pace of it—the fact that there were hundreds of jokes, every second—at first, that fascinated and delighted me. Then it started to scare me. And then I started to see it everywhere.”

From the whimsy of molecular gastronomy to sex-ed classes mimicking stand-up sets, comedy has infiltrated nearly every nook and cranny of modern American life, Jennings argues in Planet Funny.But we have yet to recognize and assess its effects.

“Today’s jokes aren’t just ubiquitous,” he writes, “they’re also a new breed: faster, weirder, more complex, more self-aware than ever before. How did we get here? How is the new sensibility changing our laughterhood? How is it changing us?”

Wake up and smell the covfefe: It’s a quantifiable phenomenon. Modern sitcoms have two to three times more jokes than they did back in your grandparents’ day (Unbreakable Kimmy Schmidt,at 6.38 jokes per minute,is a veritable fire hose of bons mots). North American ad campaigns have the highest percentage of “funny or light-hearted” content in the world—52 percent, circa 2013 (and climbing).

“Until somebody shows you those markers,” Jennings says, “it’s easy to say, What do you mean we’re living in a funny time? Look at the news! We’re living in a very unfunny time. But now that somebody’s pointed it out to me, every time I go to a store and see [Smile! You’re on camera], or anytime a bumper sticker for a serious cause is a silly slogan and not a sincere thought, I think, Wow! It really is everywhere.”

(Just look at what your neighbors named their Wi-Fi.)

It’s even in the White House, Jennings provocatively confirms: “The secret to Donald Trump’s success—and no one likes to say this about a blustering racist demagogue—is that he was so entertaining,” he writes, noting the “Faustian bargain of topical comedy” and its real-world potential for cataclysmic results.

“We haven’t yet seen the missile strike caused by Twitter jokes,” he says, “but we’re certainly closer than ever before.”

An entertaining, ultimately earnest inquest, Planet Funny ends with a prediction and a proposal: While we’re well on our way to “peak funny,” we have yet to reach the summit. Comedy will continue to creep into the soberer corners of life. So, Jennings suggests, we’d do well to mindfully maintain a place for seriousness and earnestness…somewhere.

“Deep down, I just love comedy,” Jennings says, “so I don’t have the heart to be like, Hey! Let’s just not laugh about serious stuff, guys! I can’t bring myself to be a scold, yet I do kind of see the writing on the wall. It’s not making me a better person, it’s not making America a better place.”

Megan Labrise is a staff writer and co-hosts the Fully Booked podcast.