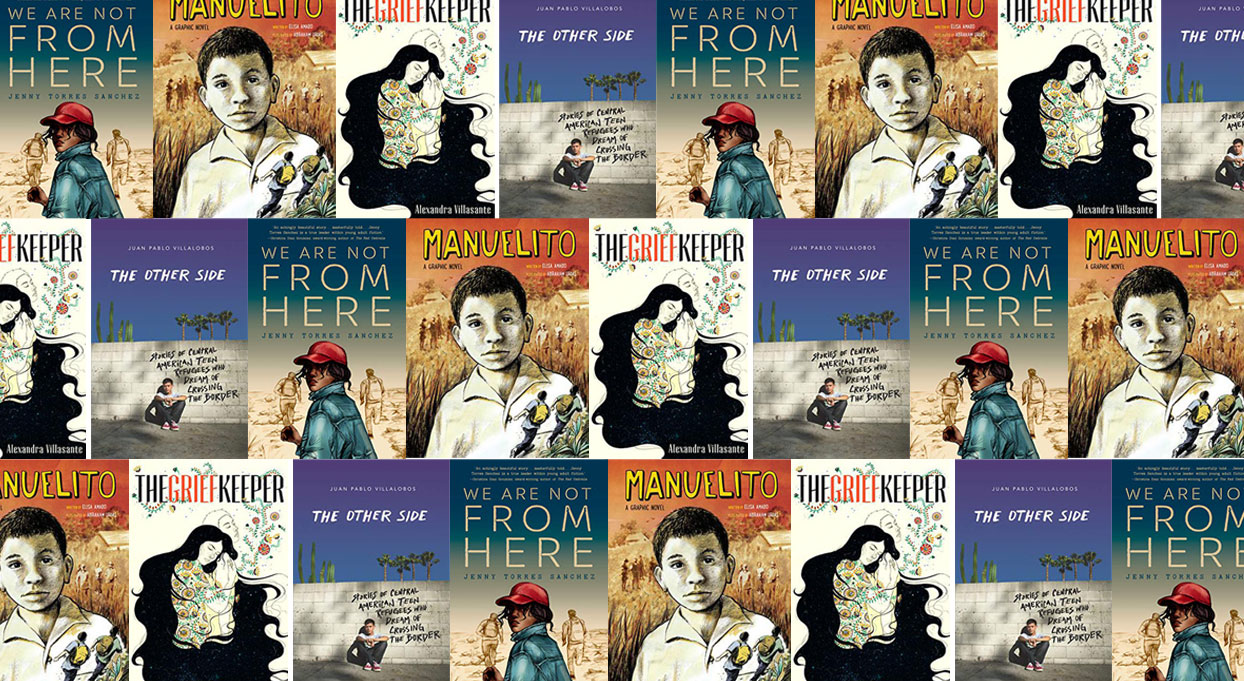 In the midst of the controversy over Jeanine Cummins’ recent novel, American Dirt, a couple of troubling words and phrases have been tossed around with some frequency: “the story” and “voiceless.” Of course, there is no single story about any group of people, something that should not need to be spelled out, yet this wording is frequently used in reference to works about marginalized people, particularly those that conform to expected narratives. Additionally, communities may be systematically excluded from traditional avenues of publishing and marketing, but that does not mean they have no voice, merely that mainstream gatekeepers would do well to listen to what they have to say.

Far from being absent from the literature, several recent young adult releases offer well-informed, well-written takes on the important topic of Latin American migration, a subject that is deserving of nuance and care.

We Are Not From Here by Jenny Torres Sanchez (Philomel, May 19) draws readers into the lives of three Guatemalan teenagers who are fleeing from a powerful criminal in their hometown. The two boys witnessed a murder he was responsible for while the female cousin of one of them was raped by this gangster, is pregnant, and faces pressure to marry him. Our reviewer praised the fact that the story is “enriched by linguistic and cultural nuances.” Sanchez writes in a note to readers that she was inspired by the experiences of her family, including her uncle in El Salvador who was assassinated during the civil war of the 1980s, her young cousin who desperately missed his mother but could not leave the U.S. because it was too dangerous to return home, and her own visits to see family in the town in Guatemala where the book is set. The book is infused with her passion and care for innocent lives lost.

One of the 2019 Kirkus Prize finalists in the Young Readers’ Literature category was the nonfiction title The Other Side: Stories of Central American Teen Refugees Who Dream of Crossing the Borderby Juan Pablo Villalobos and translated by Rosalind Harvey (Farrar, Straus and Giroux, 2019). Villalobos, a Mexican author and journalist, interviewed 11 young people who came to the U.S. as unaccompanied minor refugees and used narrative nonfiction techniques to convey their stories. From being detained in “freezers” at the border to being forced through desperation to trust random strangers, these young people from El Salvador, Guatemala, and Honduras share the varied reasons they left behind family, friends, and home cultures to make the hazardous journey to a land where they hoped to find safety. Readers learn as well about the fears that haunt them and the long-lasting emotional and psychological consequences of the traumas they endured.

Alexandra Villasante, the daughter of immigrants from Uruguay, took an imaginative approach with her science fiction novel The Grief Keeper (Putnam, 2019). Focusing on undocumented siblings from El Salvador, 17-year-old Marisol and her 12-year-old sister, the story explores the vulnerability of people who are willing to make tremendous sacrifices in the name of safety and protecting those they love. In exchange for asylum, Marisol agrees to participate in an experimental program, becoming a grief keeper, someone who bears the emotional burden for U.S. sufferers of PTSD. Readers learn of the terrible violence visited by gangs upon the girls’ family as well as the homophobia that made El Salvador a hostile environment for a queer teen like Marisol.

Manuelito is a work of graphic fiction written by Elisa Amado, originally from Guatemala, and illustrated by Abraham Urias, a native of El Salvador (Annick Press, 2019). It tells the story of a 13-year-old Guatemalan boy who journeys with a friend through Mexico to the U.S. border, where they turn themselves in to Border Patrol as asylum seekers. The contrast between the boys’ ordinary lives at home—playing soccer, going to school—and the arrival of various groups of dangerous armed men is stark. It becomes clear to Manuelito’s family that for him to remain would put his life at risk. The book references past conflicts that led to villagers hiding for years in the mountains while others were killed and buried in mass graves. The straightforward prose and expressive charcoal-style illustrations in this slim story clearly convey the dangers that drive caring families to make the unimaginable choice to send their young people away.

Each of these books contributes to readers’ broader collective understanding of refugees’ experiences. There are many more out there, all worthy of notice, each one a single story that speaks its own truth.