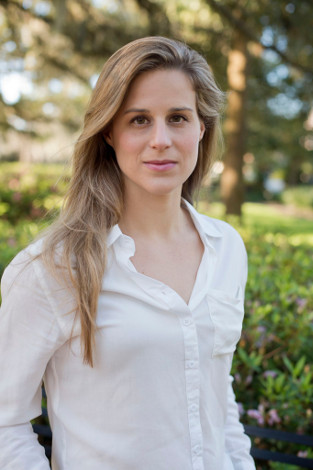 Lauren Groff’s first novel, The Monsters of Templeton, was about a town of under 2,000 people. Her second, Arcadia, focused on an even smaller community: a commune. “I asked myself, what is the smallest possible community that one could write about?” Groff says. “I came up with marriage, because it’s a community of two.”

Fates and Furies, Groff’s third novel, follows Lancelot, aka Lotto, and Mathilde from their marriage at 22—when they’ve known each other for just two weeks—over the course of the next two-plus decades. The first half of the novel, “Fates,” gives us Lotto’s perspective, while “Furies” follows with Mathilde’s.

“The more I thought about it, the more ambivalent I felt about marriage as an institution,” Groff says. “I say that with as much generosity as possible, because I’ve been married for nine years, and I’m very happy in my marriage. But as an institution, it’s very complicated, and you never really can 100 percent know the other person.”

Lotto is a man of privilege: white and male and raised in wealth. But his father dies early, and his mother sells the house for a tiny pink one on the beach: trauma, destabilization. He falls in with a not-so-good crowd and is sent off to boarding school. By college, at Vassar, he is a tall, attractive—aside from poor skin—aspiring actor who is extraordinarily successful with women. He sees the light in every lady, is conspicuously promiscuous. (“A girl screws around like Lotto and she’s, like, diseased. Untouchable,” a friend of his wryly notes. “But a guy can stick it a million places and everyone just thinks he’s doing what boys do.”) And then he meets Mathilde, and he is committed. He loves her, and we can feel it.

Mathilde’s own back story remains shadowy until we switch perspectives halfway through the book. The revelations infuse things we’ve taken at face value with a darker shade. It is as though Lotto’s, and thus our, understanding of his wife and his life was drawn in outline, and it took Mathilde’s perspective to fill it in. But we understand the same would have been true were the stories told in reverse. “Paradox of marriage: you can never know someone entirely; you do know someone entirely,” Groff writes. Or, later: “He knew her; the things he didn’t know about her would sink an ocean liner; he knew her.”

Fates and Furies is full of such contradictory statements that are simultaneously true, especially where intimacy is concerned: “We are all bundles of contradictions,” Groff says. One of the book’s driving explorations is of the separation between people and how traumatic and also necessary it is to recognize that we are, ultimately, alone. Lotto realizes this in early childhood in a gorgeous passage: “From his nest of towels, Lotto, tiny, watched his gold-banded mother and had an inkling. She was over there; he was here. They were not, in fact, connected. They were two, which meant that they were not one. Before this moment, there had been a long warm sleep, first in darkness and then in gradual light. Now he had awoken. It came out of him in a squawk, this awful separateness.”

This theme is echoed repeatedly as Lotto and Mathilde navigate their bonds (or lack thereof) with their parents, their childhood selves, and each other. Mathilde, who has a particularly fraught relationship with who she was as a kid, has a keen ability to see the child encased within the people she meets. (In one man, “she could see the sad, fat child in the mismatched jowls and thin shoulders.”) But she remains intensely conflicted about this issue. Pregnancy—the literal representation of this metaphysical concept—spurs her to disgust: “Horrible to think that inside a human being there could be a human being. A separate brain thinking its separate thoughts.” Mathilde remains unable to reconcile adult-her with child-her, for reasons we come to understand.

Marriage, of course, is the ultimate staging ground for this tension between separation and merger. When Mathilde and Lotto consummate their marriage, “their separate selves had elided”—but then they pull away again. But despite our increasing sense of what Lotto and Mathilde don’t know about each other, we never doubt that they are also truly and deeply intimate. The book is full of breath-catching moments: “Lotto turned to her and silently docked his head on her shoulder for two moments. Recharged, he turned to face the others.” Their bond is real; they love each other particularly; they know and are known. And, again, their separation is not a detriment to this connection but an inevitable and necessary component of it.

Groff’s drilldown into these two characters involves a deep exploration of creativity. After pursuing an acting career for years, Lotto feverishly writes a play in the dark of night; Mathilde, on discovering it (and, we learn, editing it), determines that this is hi

s calling. She supports his pursuit, largely unseen, as his renown jumps into the stratosphere. Mathilde has her own private creative pursuits, but she doesn’t have Lotto’s drive to be universally known and loved—doesn’t think of herself as warranting that attention, doesn’t have the sense of desperate emptiness that feeds it. “What was this mania for universal adoration?” she wonders of Lotto near the end of the book. Or, as Groff writes earlier on: “The balls it took to proclaim a creative profession, the narcissism.”

Is this Groff’s genuine belief peeking through? “Yes! I believe that it’s probably deeply narcissistic,” she says. The book is, in part, “a slightly twisted apology to my own husband for a lot of the things that I have done as someone who’s trying to create space to make things.” Sometimes she won’t talk at dinner with her husband and their two kids, for example, because she’s so involved in thinking through a story. “There are times when I do get incredibly, solipsistically invested in what I’m thinking about in the moment, to the exclusion of my family.”

But while there are seeds of Groff in Lotto, he is not her. Characters are never the people who wrote them—even nonfictional self-representations take on different dimensions as they are committed to the page. When Lotto considers his first manuscript in the morning light, he sees this metamorphosis: “Characters who were him but also not, Lotto transformed by the omniscient view.” By the end of the book, we understand this on two levels: as an outgrowth of the creative act and, simultaneously, the result of Mathilde’s involvement.

“I wanted this to be a meditation on creativity,” Groff says. “Who gets to create? Who gets to steal other people’s lives, and is it OK to do that?

“I would not have written a single book without my husband even though he has almost no impact upon the text at hand,” she adds. “He’s the one who pays the bills. He’s the one who gets up with the boys in the mornings so that I can work. All of this is sort of invisible. His name should be on my books as much as my name is.” Creativity, then, is communal, too. “It became something I had to look at, because I felt like I was taking it for granted. I wasn’t being kind in feeling my books are my own and only mine.”

But the literal work of the novel is Groff’s: the result of many, many hours spent in her studio in Gainesville, Florida. Groff is prone to researching books heavily—many times, this is how she generates ideas—but little research went into Fates and Furies, which instead involved focusing intensely on the characters. Groff is an active and athletic person (she rowed crew in college; she runs; her sister is, in fact, an Olympic triathlete), and her writing process is also very physical. “Most of my books are written in my head as I’m frustrated and going running,” she says. In her studio, she spends little time sitting and typing—she uses longhand and a standing desk for the majority of the process. For Fates and Furies, she lined two opposite walls with butcher paper: one for Lotto, one for Mathilde. “Activity is related to writing very deeply in me,” she says.

Another contradiction, then: the physical writer, the practitioner of an inward-focused, physically bound profession who loves to run free. But, like her characters, Groff has found the harmony here. She’s found peace, too, in her wish to be more like Mathilde and less like Lotto. “I would love to be as secretive and judgmental and badass as Mathilde, but I really am not,” she says. “I really am more golden retriever, and she’s more jungle cat.” But, like Lotto, Mathilde grew out of her.

“A part of that suffering is incredibly beautiful, too,” she adds. “I wouldn’t want to be alive without feeling that pain.”

Jessica Gross is a writer based in New York City.