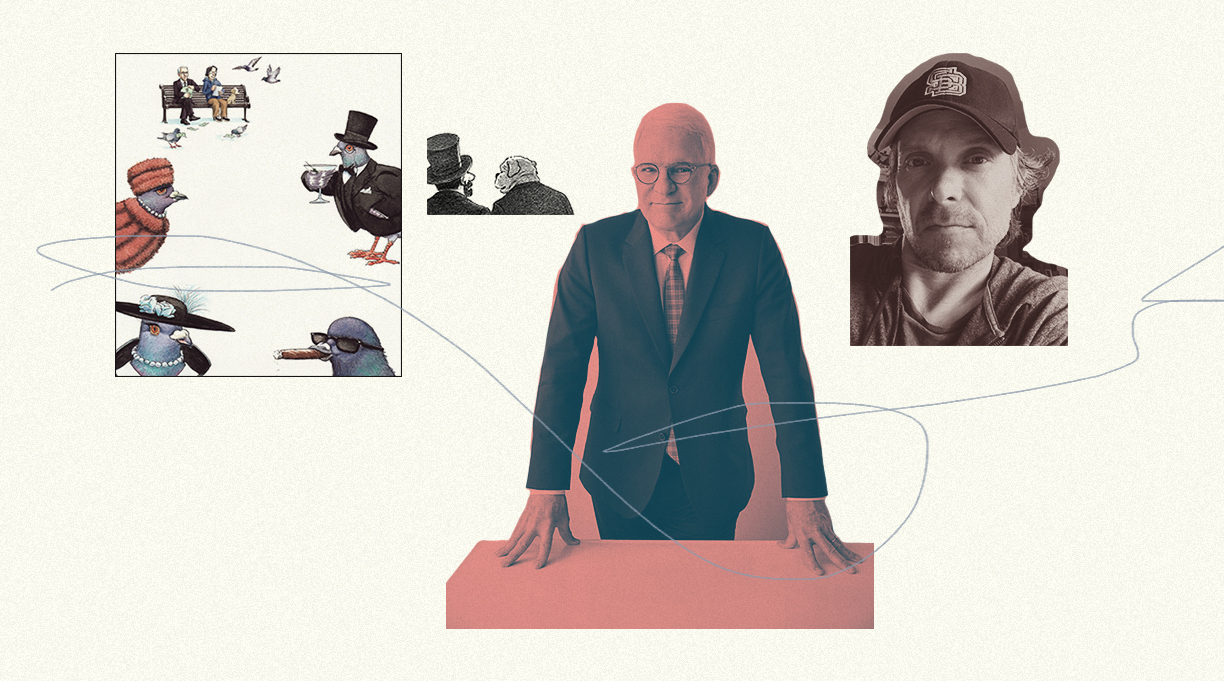 Illustrations from A Wealth of Pigeons by Harry Bliss. Photo of Steve Martin by Danny Clinch. Photo of Harry Bliss courtesy of the author

I love it when an artistic collaboration comes together. Though my colleagues in the young readers’ section of the magazine see countless wonderful author/illustrator teams each year, in my section, it’s not nearly as common. However, there have been a few such noteworthy books in 2020, including American Utopia by David Byrne, illustrated by Maira Kalman; The Autobiography of Alice B. Toklas by Gertrude Stein, also illustrated by Kalman; Long Story Short, by Mr. Fish and a host of contemporary artists; and California Exposures by Richard White, featuring photographs by his son, Jesse White.

This month, add to the mix A Wealth of Pigeons (Celadon, Nov. 17) by Steve Martin, illustrated by Harry Bliss, a New Yorker staff cartoonist since 1997. In a starred review, our critic succinctly described this fresh collaboration: “The veteran actor, comedian, and banjo player teams up with the acclaimed illustrator to create a unique book of cartoons that communicates their personalities.”

In the introduction, Martin discusses the germination of the project and his admiration for Bliss, who was recommended to Martin by New Yorker art and cover editor Françoise Mouly, and the artistic sensibilities of cartoonists in general. “I’ve always looked upon cartooning as comedy’s last frontier,” he writes. “I have done stand-up, sketches, movies, monologues, awards show introductions, sound bites, blurbs, talk show appearances, and tweets, but the idea of a one-panel image with or without a caption mystified me. I felt like, yeah, sometimes I’m funny, but there are these other weird freaks who are actually funny.”

It’s also interesting to read about their process of collaboration (“Harry turned out to be the ideal partner: We rarely speak to each other, and we live in different states”), a subject that will appeal to any artist, veteran and aspiring alike. “We discovered we had two ways to work: forwards and backwards,” writes Martin. “Forwards was me conceiving of several cartoon images and captions, and Harry would select his favorites; backwards was Harry sending me sketched or fully drawn cartoons for dialogue or banners.”

Both methods seem to have proceeded smoothly, as the quality of the work attest. Though there are some multipanel cartoons as well as a few that feature cartoon versions of Martin and Bliss, the best are the single-panel ones. Among the highlights: a baby riding a unicycle and juggling simultaneously as the mom asks the dad, “Encourage or discourage?”; a smiling chicken piloting a Segway (“The Lighter Side of Big Agra”); a cowboy pointing a revolver at the Grim Reaper and saying, “Well, look who brought a knife to a gunfight”; two moles looking up at a mountain as one tells the other, “It started out as a molehill, but then I just kept going”; a sheriff about to pull the lever on the gallows tells the man about to be hanged, “Let’s just say we agree to disagree.” Given my last name, this one was particularly relevant: Titled “The Tyranny of Names,” it depicts a clerk at the DMV calling out, “Edgerton Bumbledork? Is there an Edgerton Bumbledork here?”

This is the kind of book that will please a wide variety of readers, from New Yorker fans to Far Side devotees and  anyone who reads the Sunday funnies, making it a perfect Christmas gift. Our reviewer captures its spirit well: “What also makes this project successful is the team’s keen understanding of human behavior as viewed through their unconventional comedic minds.”