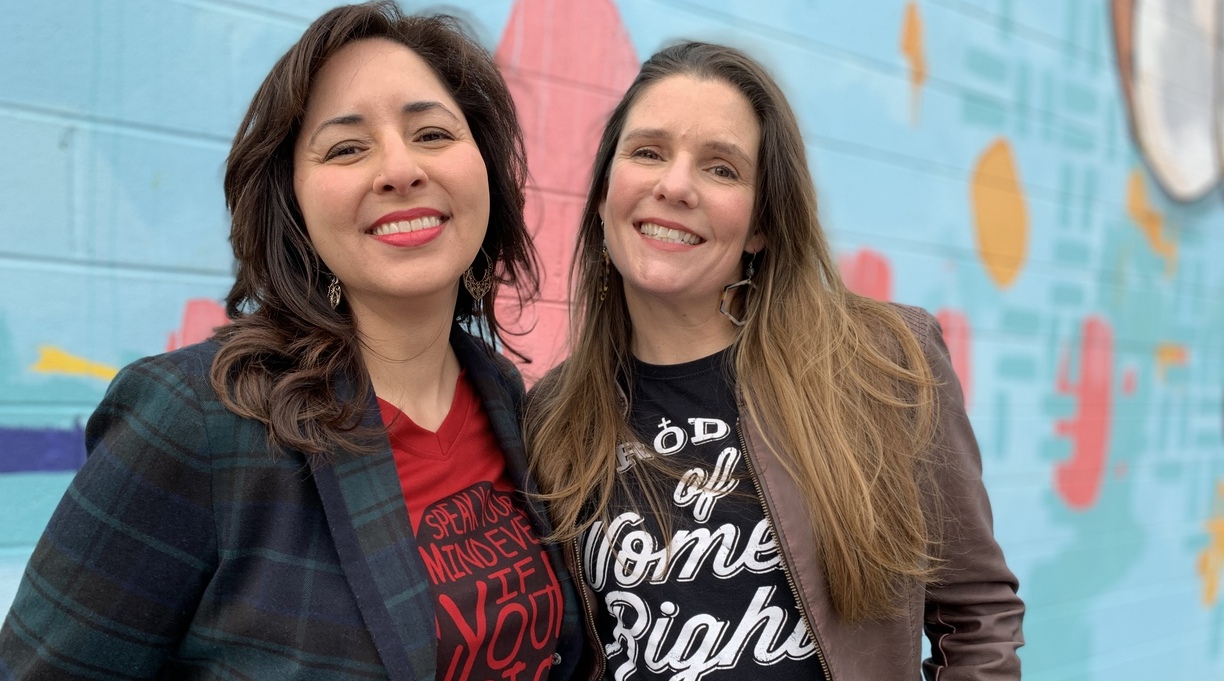 Mayra Cuevas and Marie Marquardt were friends at first sight. “It was an instant connection,” Cuevas tells Kirkus on a Zoom call with Marquardt. They met at a Romance Writers of America conference, both of them in search of a critique partner.

“I am very much about intention and very much about asking for what you want,” Cuevas shares. “I sat in the parking lot before the conference, praying I’d find my person.” But when she went inside, the organizers couldn’t find her registration. She was left to her own devices to find a seat, and every table was packed. Every table, that is, but Marquardt’s.

“We quickly became good friends,” Marquardt remembers. “We developed a deep connection. We started to critique each other’s work, and that’s how it went for many years.”

It was a while before the stars aligned for a collaboration. “We both had our own projects,” Cuevas says, “and then when we started saying, Oh, we should really work on something together, we wanted to wait for the right idea to come along.”

In 2018, that idea revealed itself to the pair in the form of myriad teen-led protests against oppressive school dress codes.

“When you talk about dress codes, I feel like many people think, Oh it’s just a dress code, you know, It’s not that important,” Cuevas says.“But it is important, and we found that all the research and all the data say that these dress codes are perpetuating sexism, victim blaming, rape culture, racism. And they’re hindering the education of girls and people that belong to marginalized communities, because they are being unfairly targeted.”

Their first novel together, Does My Body Offend You? (Knopf, April 5), explores these ideas, following two teens—Malena, who is Latinx, and Ruby, who is White—as they unite to oppose their high school’s draconian dress code. In the course of their battle, they learn how to be effective activists and, in Ruby’s case, a good anti-racist ally. The story links race, gender, and spirituality as the characters come to understand their relationships to their own bodies through experiences both traumatic and revelatory.

“We noticed that a lot of young adult books that were tackling this issue weren’t diving into the issue of intersectionality,” Cuevas says. “This whole idea of White saviorism and how that not only applies to the dress code itself, but to the issues of student activism and social justice.”

The choice to highlight intersectionality in activism was empowered by the writers’ real-life friendship. “I recall writing a conversation between Malena and Ruby that we were committed to making as right as we possibly could,” Marquardt says. “Every word and every gesture was so important because it was a hard, nuanced conversation. We sat together and we spoke it, back and forth and back and forth, to each other. It was a privilege to have our characters enter into these conversations, and we wanted to do our very best to honor them.”

“Co-authoring, we pushed new limits in our writing,” Cuevas notes. “We had to.”

Malena and Ruby certainly swim through dark waters, weathering sexual assault and the loss of a homeland. “I really credit our friendship for those moments,” Marquardt says. “We already had a solid foundation for moving into vulnerable spaces together. I think it allowed for some creative work that we would not have approached otherwise.”

Spirituality is another delicate piece of ground deftly traversed by the co-authors. Cuevas shares, “It’s one of the things that I feel is really missing from many fiction books. I grew up Catholic and I’m a practicing Buddhist. I think for me and Marie, in our hearts, we’re spiritual beings.” It’s something held lovingly alongside every other facet of the characters’ identities.

Throughout the novel, Malena draws strength from her necklace of the Virgencita, although her relationship to Catholicism remains ambivalent. The focus on the figure of the Virgin Mary is no coincidence: “The image of the Virgin is absolutely used as a bludgeon against women,” Marquardt says. “But I’m a big fan of resignifying Mary: For me, she’s really this model of courageous action, of human connection, and compassion.”

Marquardt, a scholar of anthropology, is the co-founder of the Georgia nonprofit El Refugio, which supports detained immigrants, asylum seekers, and their families. Cuevas, who has a background in journalism, is the co-founder of the Latinx KidLit Book Festival, where she works to bring more Latinx voices into classrooms across the United States and the world. With the efficiency born of painfully necessary repetition, she explains, “There’s a huge disparity right now between the number of books published about Latinx culture and the number of Hispanic and Latinx students in public school classrooms.”

The authors’ experiences in advocacy informed the philosophy of the book. “Mayra and I both are true believers that fiction is an important tool in justice work because it builds empathy,” Marquardt says. “Without empathy, change will not happen.”

Ilana Bensussen Epstein is a writer and filmmaker in Boston.