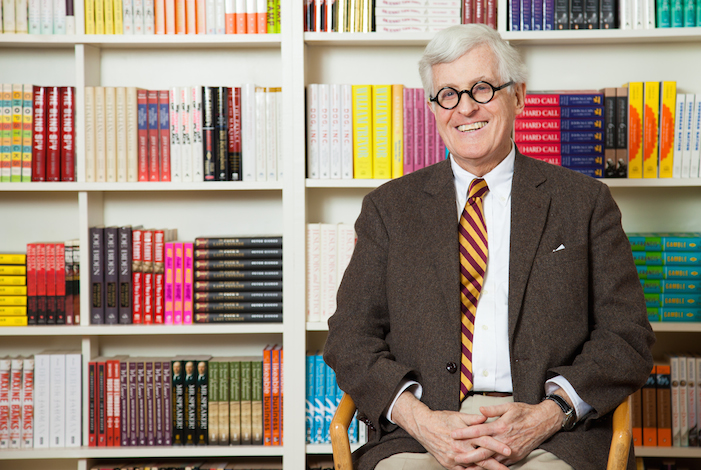 My friend George Nicholson died on Feb. 3 at the age of 77. At the time of his death, he was a respected literary agent at Sterling Lord Literistic for writers of children’s and YA books, but he had also been a groundbreaking editor and executive who changed the way that children read. Leonard Marcus, the children’s book historian, writes in Minders of Make-Believe: Idealists, Entrepreneurs, and the Shaping of American Children’s Literature that George’s innovations compelled children’s book publishers to “lower their pride and experiment with a book format, and approach to trade publishing, that they had long considered beneath them.” In the mid-’60s, George was the head of Dell Publishing’s then-new children’s book division. At that time, Dell’s adult output was low-rent stuff like Inside Detective and Modern Romances. “It was fascinating going to work in the morning because you’d walk into the waiting room and find people dressed in leather and chains or in evening gowns,” George told Horn Book in 2007. They were the actors and models hired to pose for the racy covers of those magazines.

There weren’t many children’s books published in paperback then, and those that were weren’t literary. Hardcovers last longer after numerous checkouts at the library, but publishers had a trickier justification for not publishing in paperback: there was no prestige in it. And Dell was good at nonprestigious adult paperbacks. Rather than spend a career feeling like he was from the wrong side of the tracks, George changed the entire scene; after convincing E.B. White’s widow, Katherine, he bought the paperback rights to the literary masterpieces Charlotte’s Web and Stuart Little for $37,500 at a time when, as Marcus points out, most kids’ book writers received advances of $500 to $1,000.

He published those paperbacks smartly and faithfully to the original hardcovers. But it wasn’t just all that cash George had access to at Dell that made the revolution in children’s publishing long-lasting. Employing his diplomatic skills, he confronted the gulf in taste and prestige between the mass-market and trade publishers. “The first thing I did at Dell was to go and see every trade editor in the industry and explain what I was trying to do and say that I hoped we could cooperate,” he told Horn Book. George’s innovation and charm made books more available to children. “As publishers struggled to find ways to respond constructively to national events,” Marcus writes in Minders, “the affordable format seemed an ideal means of putting books that addressed the issues of race and poverty into the hands of more of America’s young people.”

What George treasured most about being an agent was the thing he loved the most about being a publisher: unearthing a manuscript that he wanted to share with readers. “I can be bowled over by the activities of the day, but if I close the door and get in an hour’s worth of reading and am lucky enough to stumble onto something that I really like, it totally revitalizes me,” he told Marcus. “And the business itself remains genuinely fascinating. It’s like a giant puzzle that falls apart from time to time. It’s shapeless one minute, but then it takes on a new shape—often a surprising one.” Rest in peace, George.

Claiborne Smith is the editor in chief of Kirkus Reviews.