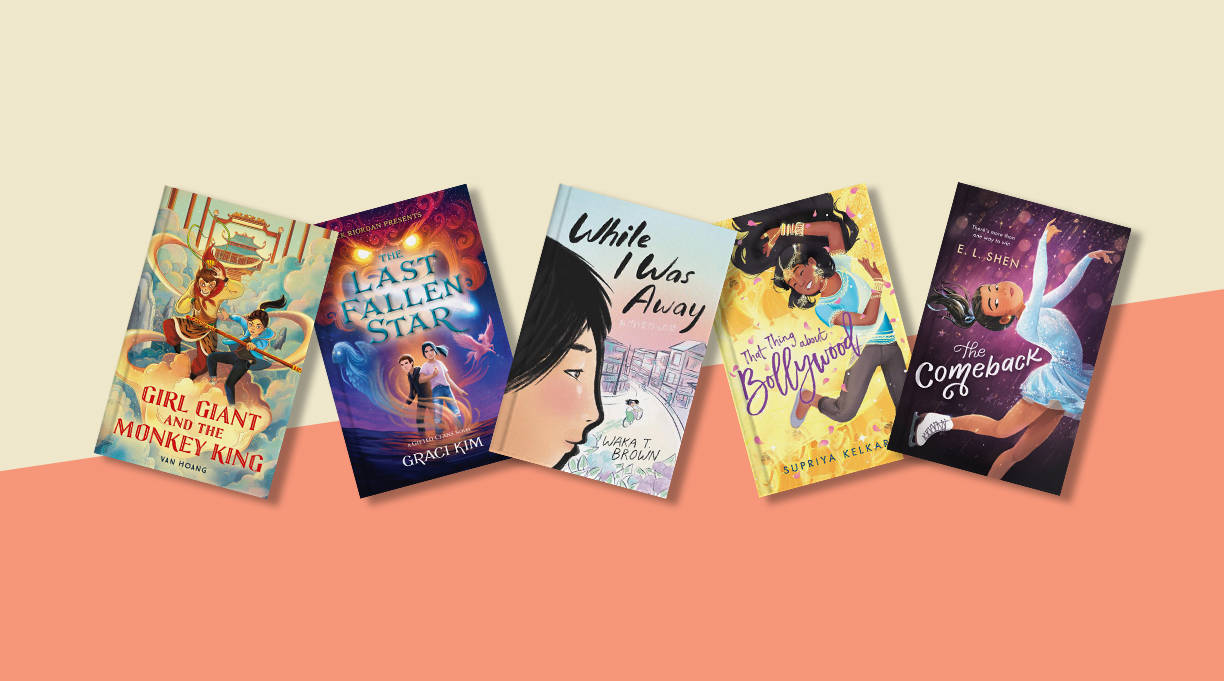 Sixteenth-century Filipinos were taken by the Spanish to what is now California. Enslaved South Asian people were brought to 18th-century Virginia by the British. Nineteenth-century Chinese workers helped build the transcontinental railroad. The history of Asian Americans is a long, varied, and fascinating one that defies simplistic stereotypes, xenophobic rhetoric, and divisive narratives of exceptionalism.

Fortunately, middle-grade literature increasingly draws upon this rich heritage to present a broader range of stories than in the past (although there is still plenty more ground to cover). With AAPI Heritage Month coming up in May, what better time to explore some of these titles? Not only do we have new follow-ups to popular titles—Amina’s Song by Hena Khan (Salaam Reads/Simon and Schuster), Aru Shah and the City of Gold by Roshani Chokshi (Rick Riordan Presents/Disney), and Force of Fire by Sayantani DasGupta (Scholastic)—there are also fantastic stand-alones and new series openers like the following:

Thom, a Vietnamese American girl, struggles with a move from California to Georgia, where she is excluded by her mostly White peers, losing joy in even her beloved soccer in Girl Giant and the Monkey King by Van Hoang, illustrated by Nguyen Quang and Kim Lien (Roaring Brook, 2020). Try as she might to blend in, she recognizes that “everyone knows I’m Asian. It’s not like I can hide it.” Everything is made trickier by her new, magical superstrength and the arrival of the legendary havoc-wreaking Monkey King. Our review praised this “tale of magic and family strongly grounded in contemporary reality.”

The Comeback by E.L. Shen (Farrar, Straus and Giroux, Jan. 19) follows Maxine, a dedicated figure skater. Although she has plenty of Asian American figure-skating heroes to look up to, the Chinese American sixth grader is among the few students of color at her Lake Placid, New York, middle school. When a White boy targets her with racist bullying, a classmate tells her “he’s just joking.” A competitor at the ice rink might also dash her hopes of winning at regionals. Fortunately, Maxine’s got a supportive family and a fighting spirit.

Waka T. Brown’s While I Was Away (Quill Tree Books/HarperCollins, Jan. 26) is a deeply moving memoir that transports readers to 1984, when the author was 12. Her parents worried that by growing up in Kansas she was losing touch with her heritage, so they sent her to live for several months in Japan with a grandmother she barely knew. In addition to language barriers, cultural differences proved to be a stumbling block as she tried to adjust to her new school, make friends, and connect with her prickly, formal Obaasama.

Hattie and Riley are Korean American sisters—one adopted, one not—who concoct a plan to ensure that regular mortal Riley will be able to share her sister’s magical powers in Graci Kim’s The Last Fallen Star (Rick Riordan Presents/Disney, May 4). It’s the day of Hattie’s initiation, and all the clans are gathered at the temple. What could possibly go wrong? As it turns out, quite a lot. Attempting to put things right involves running around Los Angeles’ Koreatown, encountering beings from Korean mythology, and discovering well-kept secrets.

That Thing About Bollywood by Supriya Kelkar (Simon and Schuster, May 18) takes the exuberance of Bollywood and juxtaposes it with the struggles of Sonali, a California tween who has internalized her Indian immigrant parents’ messages about keeping up appearances. They’ve hidden from outsiders her beloved aunt’s cancer diagnosis as well as their own distressing marital struggles. As uber-controlled Sonali reaches her emotional breaking point, she’s struck with “Bollywooditis,” which forces her to show the world how she’s really feeling—the first step to building authentic relationships with everyone from her best friend to her family.