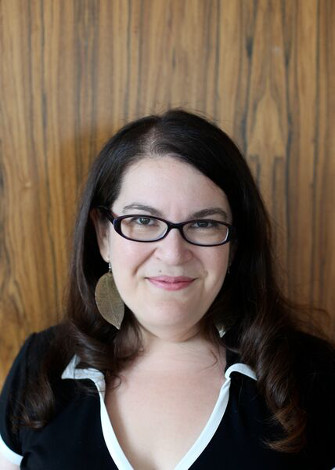 The world of Naomi Alderman’s novel The Power is very much like our own, with one crucial difference: women—teenage girls, really (like everything else, it begins with the girls) discover they can send jolts of electricity with the tips of their fingers. What they have, suddenly, is raw power: the charge is enough to shock, to maim, to kill. The younger women awaken the power in the older ones, until women, not men, hold the trump card of physical strength. It is a simple reversal; it is enough to upend the world.

When I talk to Alderman, it’s been a year since the novel was first published in the U.K.—this June, it became the first work of sci-fi to take the Baileys Women’s Prize for Fiction—and I want to know if it resonates differently with her now, amid this, the “fucking cluster fuck that is 2017.” But as Alderman cheerfully points out, her subjects—gender and violence, power and the corruption of it—are perennial classics. “That’s some evergreen humanity stuff there,” she tells me brightly. “People abusing their power is probably never going to stop. I’m really, really sorry to have to tell you that.”

The novel, Alderman explains, has a number of origin stories, but here are some of them: she was listening to a writer, a man “who I respect a lot,” interviewed about the existence of the patriarchy, why, throughout history, men have spent so much time, in so many societies, subjugating women. “And this male writer gave a very sweet answer. He said, ‘Well, I think men are jealous of women’s ability to give birth.’ And I thought, ‘Oh, honey. That is so adorable. That is 100 percent not the reason.’ ” It’s easier than that, she says. It’s because they could.

“More men, on average, can throw women across the room than the other way around,” she says. “Have we so roundly ignored that in our discourse that it’s possible for an intelligent, well-educated person to not even think about that as the reason?” The cruel simplicity: whenever there is a power imbalance, someone will take advantage of it because they can.

Also: she was in the midst of a rough breakup, “like one of those breakdown breakups,” when she noticed an ad on the London tube, a sexy woman crying. “And at this moment, something in me just broke, because it seemed like the whole of the culture that I was living in was saying, ‘Hey, this pain and distress that you're going through right now, this thing you're doing, waking up every morning and bursting into tears? We like that, that's great, that's expected, please carry on being in pain, your pain is attractive.’ ” What would a world look like, she wondered, where you could get on the tube and see a sexy poster of a crying man?

And: an increasing interest in electric eels. Alderman knew—had known there on the tube, pondering the sexy crying poster—that for the novel forming in her head, the women would have to have some kind of physical power, but she wasn’t sure what, except that it shouldn’t feel cartoony. That led her to electric eels, which led her to do a program about them on BBC Radio 4, where—in addition to her novels (there are now four) and her teaching (creative writing, at Bath Spa University) and her game design (“Zombies,” “Run!,”among others)—she hosts a show about the history of science. Borrowing from actual earthly animals made the power feel real.

At the same time, she was invited to apply for, and won, a mentorship with Margaret Atwood to work on the project. “If ever one is in doubt in one’s life about whether or not a particular book is a good idea, having one of the world’s greatest literary geniuses say, ‘I'd like to work with you on this’ book seems like quite a good sign,” she jokes.

The resulting book is big and bold and challenging and also, despite the violence, a tremendous amount of fun—which is not to say that it is, necessarily, an easy read. “I think women feel sort of empowered by it, which is part of the object of the exercise, and then also find themselves very shocked and horrified by the end”—at the risk of spoilers, the result is not a feminist Utopia—“which is also, of course, part of the point.” Still, she suggests, it’s a “nice place to visit for a while,” this world where “nobody could mess with you.”

Male readers have found it notably less nice. “Men tend to be really horrified, as if I have made up the idea of rape and violence and sexual enslavement.” They’ve heard about violence against women—it’s bad, they’re against it—but “if you have never felt that heaping weight on your shoulders, then perhaps you haven’t ever put it together and gone, ‘Oh, like women must feel all this shit all the time.’ ”

“It's a gift to introduce them to that,” Alderman laughs, though it’s true. Just one of the novel’s many gifts.

Rachel Sugar is a writer living in New York.