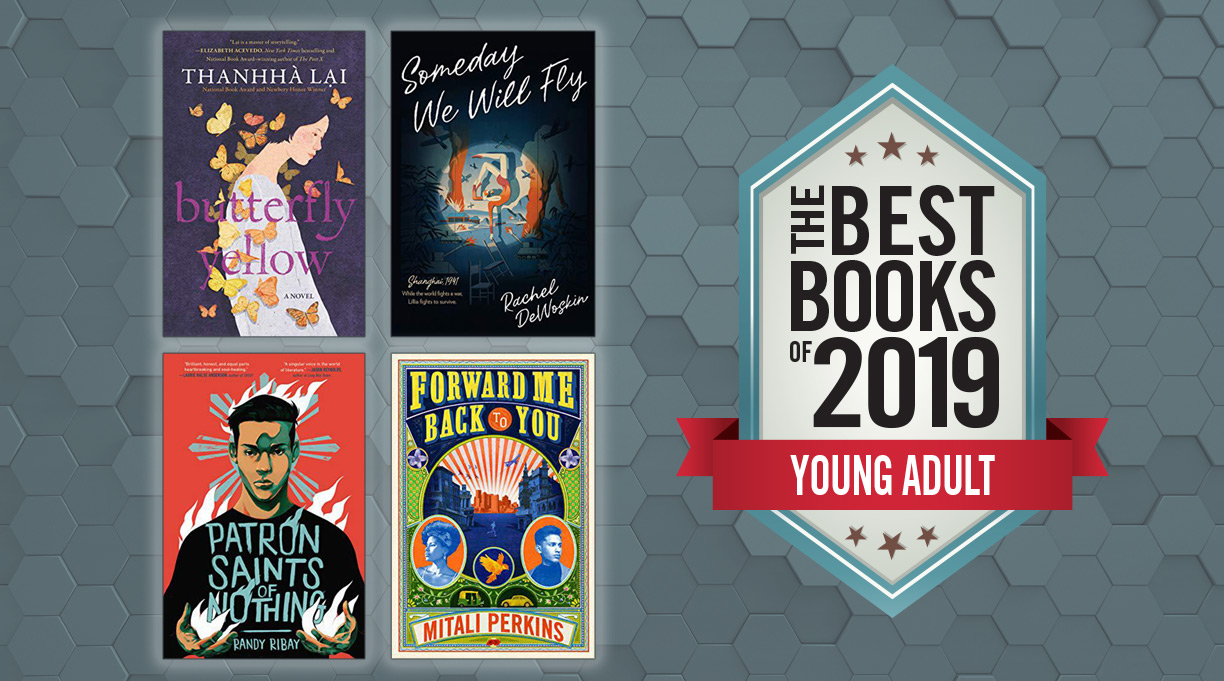 After many hours spent reading, sorting, and resorting, I came to some difficult decisions and settled on the 75 top YA titles of the year. It is in the nature of teens to question limits and to seek truth, and in a world where borders and barriers are becoming increasingly calcified, I noted with interest how many 2019 titles featured growth as a consequence of crossing boundaries both literal and figurative. Here are just four examples to pick up, each a superlative work of literature showing how being lifted completely out of one’s element is a catalyst for development.

Someday We Will Fly by Rachel DeWoskin (Viking, Jan. 22) highlights the experiences of Jews who fled to Shanghai during World War II seeking to escape the Nazis. Focusing on one Polish family—Lillia, her baby sister, and their Papa—it explores many layers of displacement and dislocation, as European Jews settled in a Chinese city that was occupied by the Japanese. Lillia and her family are traumatized, fear that their high-spirited Mama has been lost to them forever, and are uncertain what the future may hold, but they must find the will to carry on and adapt to a new culture and language. Lillia’s crush on a Chinese boy and her intrepid interest in exploring her new city uplift this tale of survival and human connection in the most desperate of circumstances.

In Forward Me Back to You by Mitali Perkins (FSG, Apr. 2), two American teens travel to Kolkata to volunteer with survivors of trafficking. Bostonian Robin has wealthy white parents who adopted him from an orphanage in India. He feels adrift and uncertain as well as curious about his birth mother and the circumstances surrounding his early years. Jujitsu champion Katina comes from Oakland. Following a disciplinary incident at the private school she attends on scholarship that highlights entrenched inequities, she accompanies Robin’s church youth group on a summer mission trip. Both teens are very much outside their element, and the people they meet in India challenge their expectations and help them learn to truly listen to others rather than assuming they know what is best.

Patron Saints of Nothing by Randy Ribay (Kokila, Jun. 18) follows Jay, a biracial (Filipino/white) Michigan senior who spends spring break visiting family in the Philippines and investigating the mysterious death of his cousin Jun, apparently killed as a result of Duterte’s harsh anti-drug policies. Jay wrestles with remorse and imposter syndrome. He stopped replying to Jun’s letters when he met a girl he liked, and while he chafes when white friends act like “not seeing race” is a compliment, he also realizes that he has much to learn about Filipino culture. Although brief, his time in the Philippines is revelatory both for him and his grieving, wounded relatives. Jay gains new perspectives on his identity, his beliefs about the Philippines and the U.S., and his options for the future.

In Thanhhà Lai’s Butterfly Yellow (HarperCollins, Sep. 3) Hằng is a Vietnamese refugee newly arrived in Texas, seeking the younger brother she has been separated from for years following her misguided effort to get them both to safety; LeeRoy is the son of East Coast academics who dreams of becoming a rodeo cowboy. What happens after their paths cross ends up answering both their needs, although not in a way either of them could anticipate. Hằng’s disorientation is conveyed effectively, showing her to be a young woman of courage and purpose, a survivor of trauma who evokes sympathy but never pity. Motivated by love and guilt, a sense of urgency drives her forward. LeeRoy, meanwhile, is quite sure his parents’ goals aren’t right for him, and he’s reaching for a tantalizing fantasy world.

Each of these books, and many others from this year’s list, offers a reminder that we have much to gain from deliberately putting ourselves in uncomfortable situations where we must reexamine everything we believe to be true and shake up comfortable mindsets. At a time when many fear or actively shun those who are different, works like these are of tremendous importance.