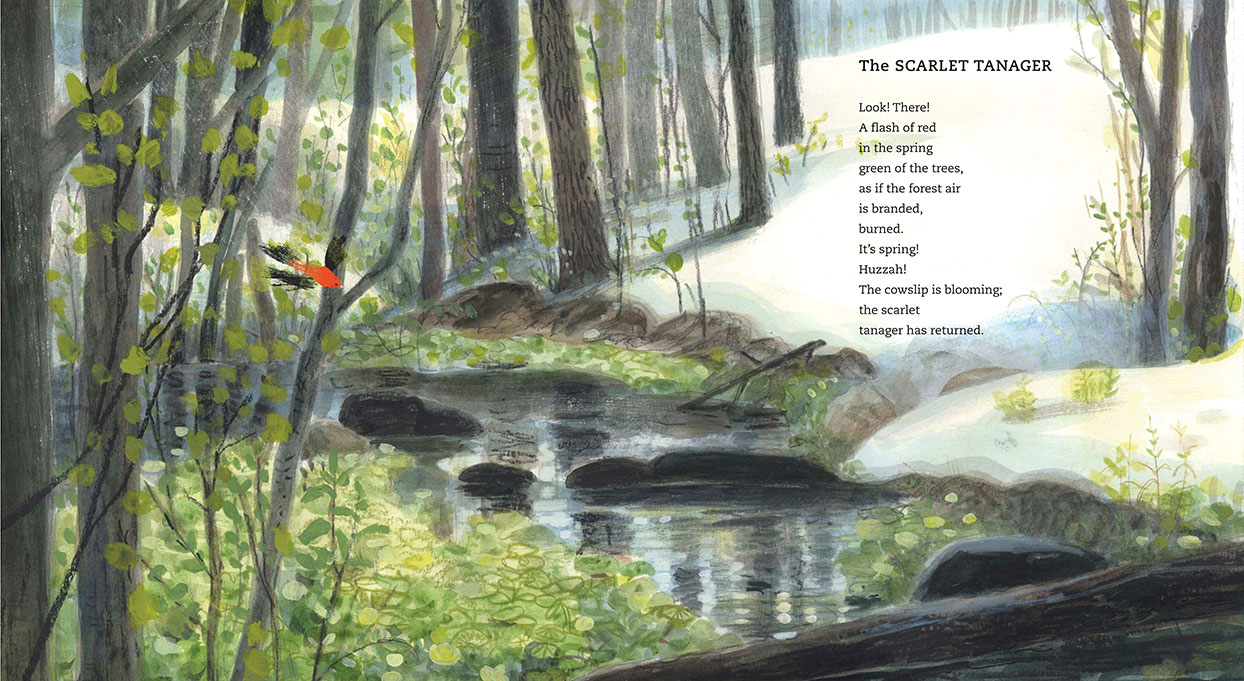 From In the Woods, illustration by Rob Dunlavey

Poetry is one of those areas of literature where children are way luckier than grown-ups. While poetry for grown-ups is a rarefied art, largely relegated to journals with small circulations and anthologies with equally tiny press runs, poetry for children is a thriving thing for all ages.

Continuing a literary tradition dating back at least to ancient Sumer, children’s authors often compose stories in verse, ranging from picture-book tales to lengthier texts for older readers. It’s so commonplace that many readers may not even stop to think that such perennial favorites as Anna Dewdney’s Llama Llama Red Pajama (Viking, 2005) and Sherri Duskey Rinker and Tom Lichtenheld’s Goodnight, Goodnight Construction Site (Chronicle, 2011) are forms of verse. But short-form, nonnarrative poetry for children abounds as well.

The combination of verbal and visual imagery means that picture-book collections offer multisensory experiences for their readers. In Woke (Roaring Brook, March 10), Mahogany L. Browne, Elizabeth Acevedo, and Olivia Gatwood join forces to give young readers a series of poems on activism and resistance, illustrated by Theodore Taylor III, whose bold outlines and bright colors emulate graffiti. Acevedo writes in “Rock the Boat” that “you may want to be quiet / so as not to rock the boat, / but just know / you contain waves, / you are an ocean.” The accompanying picture shows a multiracial group of determined protesters holding signs: “I AM THE FUTURE,” reads one, held high by a child perched on the shoulders of an adult who tenderly holds the tot’s legs for safety.

The late poet and anthologist Lee Bennett Hopkins (1938-2019) and illustrator Ellen Shi’s Construction People (Wordsong/Boyds Mills, March 17) is, as the title suggests, an elegant assemblage of poems focused on builders, the arrangement of poems and illustrations taking readers from planning to finished skyscraper. In the illustration for J. Patrick Lewis’ “Electricians,” a smiling, brown-skinned figure with locs under a yellow hard hatstrings and snips wire, representing the “Master and apprentice technicians, / the nation’s hot-wire magicians, / [who] work to empower the dark / tower.”

There are many creatures to be found In the Woods (Candlewick, April 7), and they populate poet David Elliott and illustrator Rob Dunlavey’s sweet collection that mixes imagistic musings with whimsy. “The Scarlet Tanager” is “A flash of red / in the spring / green of the trees, / as if the forest air / is branded, / burned”; in the accompanying painting, a diamond-shaped streak of red with blurred, black wings stands out dramatically against dappled greens. In contrast, Elliott tells “The Opossum” that with “Your rattish snow, your naked tail / dragging on the woodland trail: / you’re not a classic beauty”; a beady-eyed mother possum looks out at readers as seven fuzzy baby possums cling to her fur.

Poet Leslie Bulion supplements her wry verse with paragraphs of prose while illustrator Robert Meganck’s clear, humorous cartoons offer levity in Amphibian Acrobats (Peachtree, March 1). The bulging eyes of two half-buried Australian desert spadefoot toads peer out as readers learn how “down under scorched sand / pudgy toad-spuds dream”; indeed, both toads and sand are potato-skin brown. The value-added scientific note adds, “Using another froggy trick to protect their skin from drying air, they tuck their legs and hunker in the shape of a small, roundish potato.”

The adults who read these books with their kids are some kind of lucky.