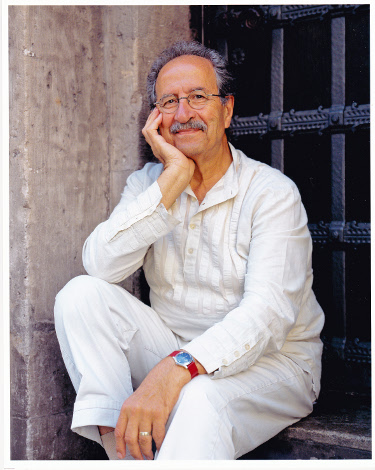 When Rafik Schami emigrated from Syria to Germany as a young man, the sights, sounds, smells, and struggles of Damascus went with him. Forty-seven years later, one of Germany’s most influential authors offers young readers a story inspired by rich memories. Illustrated by Peter Knorr, translated by Hiltrud Schulz and Michel Moushabeck, The Storyteller of Damascus (Dec. 1) is “a writing, translation, and illustration masterpiece,” our reviewer writes in a starred review.

Schami answered our questions, via email, through translator and publisher Moushabeck. The interview has been condensed.

Would you please introduce our readers to the ancient Arab art of storytelling?

Arab culture is greatly influenced by the desert. I have written a lot about this subject. The clan/tribe was important in order to survive in a wild and hostile-to-life environment. Today, the clan is an impediment to democratic and liberal progress. The famous Arab hospitality is the daughter of mother desert. Prevailing weather conditions—not conducive to painting or sculpting—encouraged storytelling. Hungry Bedouins told stories about a paradise with rivers of milk and honey (paradise is a lush garden in all religions of the region). It was the ideal environment for storytelling—more so because of the lack of paper and writing abilities. This situation trained the memories of the Bedouins, who had strong memories to start with. They not only liked to tell stories, but also enjoyed listening to stories told by strangers who stayed in their homes. These stories changed from one teller to the next and transformed the desert’s monotony into colorful, fantastic images. Arab culture, in which the art of storytelling was cultivated, thrived in cities, including Damascus and Aleppo, after the Arabs captured the surrounding countries. Each coffeehouse would have its own storyteller, called hakawati, who would tell stories every evening and would stop the story at its most suspenseful moment, the same way Scheherazade had done in One Thousand and One Nights.

As a young person, did you attend such performances?

Certainly, I experienced storytelling events at cafes in Damascus as well as on the street when the storyteller came to our neighborhood with his magic box. Whenever he came to our block, I begged my parents to give me five piasters. I watched the same reel over and over again even though each time the story would change a little as the storyteller embellished scenes and added more details to it.

There are two storytellers in your book: an old man who traveled with a cabinet of wonders, entertaining neighborhood children, and a narrator who reveled in his performances. Why is the latter a person of indeterminate gender?

I am tired of Arab stories in which adult men are always the heroes. I know that women are marvelous storytellers and they make the best heroines. I have known this since I was a child because my mother was one of the female storytellers.

The old man tells the “same” story over and over—but not quite. Must a storyteller give of oneself, and change with the times, in order to be truly great?

This is a wonderful question that already includes the answer. Yes, he or she has to do it, otherwise the storyteller—the well of the story—will dry out.

What is the highest compliment a reader could pay you?

I am thrilled when a reader writes to me to let me know that one can read my book again and again and discover something new each time. This is much more gratifying to me than any prestigious literary award. I write and tell my stories because I want to make people happy; I also want them to reflect on what they have read. This is what brings people of the world, especially children, closer to each other.

Megan Labrise is a staff writer and co-host of the Fully Booked podcast.