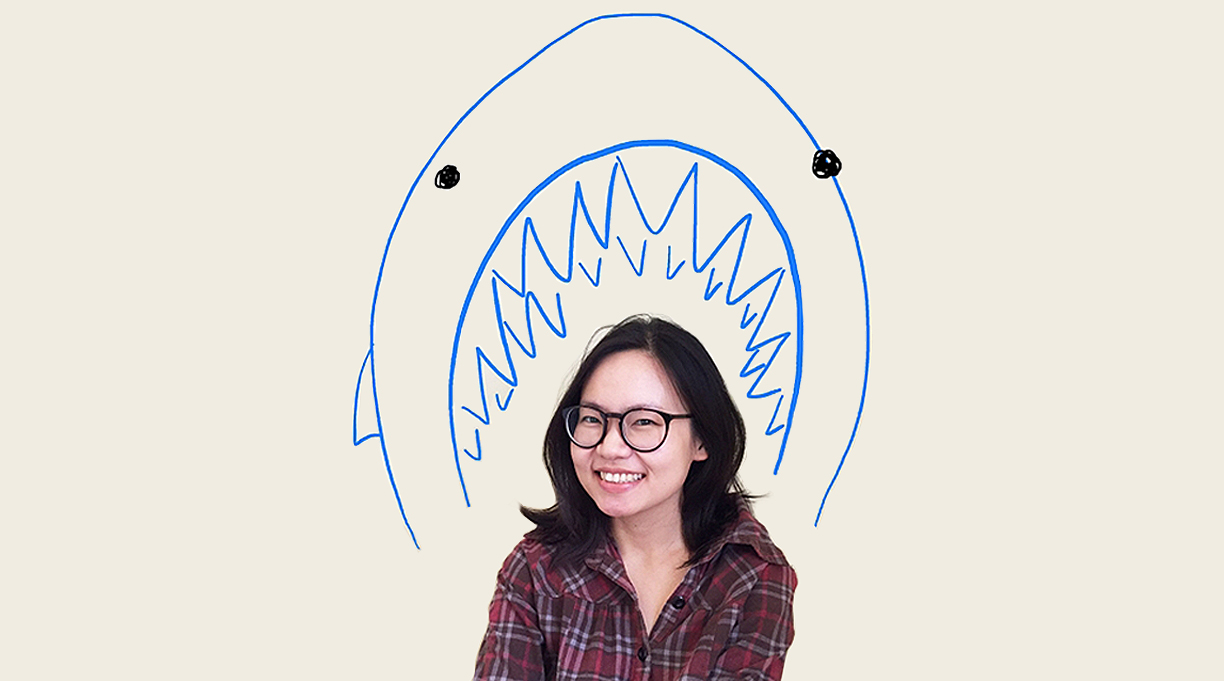 Remy Lai’s debut, Pie in the Sky (Henry Holt, 2019)—a hybrid book combining prose and comic-book storytelling—told the story of Jingwen, a 12-year-old recent Chinese immigrant to Australia grieving his recently deceased father. It was named to multiple best-of-the-year lists, including Kirkus’ own. She follows this up with another graphic hybrid, Fly on the Wall (Henry Holt, Sept. 15), about Henry, a Chinese Australian 12-year-old with a hyperembarrassing helicopter family. Suffering the dissolution of a yearslong best-friendship, he begins an anonymous illustrated gossip blog, Fly on the Wall. With exposure at school looming, he decides the only solution is to escape to Singapore, where his father lives. Scenes depicting his flight are interleaved with Fly on the Wall posts and backstory, all coming together in an adventure that is equal parts hilarity and heartbreak. We spoke to Lai via Zoom from her home in Brisbane, Australia. The interview has been edited for length and clarity.

I thought it was so interesting how Jingwen seeks connection with his deceased father and Henry with his distanced father, who he’s convinced doesn’t really even like him. You write such funny books that are so incredibly sad.

I always want to make people cry. But I also want to make people laugh, because that’s the kind of book I personally like to read. I don’t want to just laugh, I want to be made a little bit sad. When I wrote Pie in the Sky, I was very conflicted about whether I wanted to kill off the dad. [When] I started to write, I knew that the dad wasn’t there. I just wasn’t sure why he wasn’t there. It came later that he had passed away. But then, on the other hand, when I was writing Fly on the Wall, well, I was very sure that I didn’t want anybody to die. That made it even harder in a way, because when someone isn’t dead, you’ve got to work a little bit harder to find the poignant side of it.

What about the helicopter family? It’s very slapstick, but they are also very sweet.

I knew that his journey had to be forbidden. If his family allowed him everything he wants, then there’s no conflict in his story. [But] there’s a stereotypical trope of Asian parents being overbearing and stuff. And I didn’t want to make that too heavy. So I went the slapstick way.

I realized as I was reading the book that I had no idea what kind of stereotypes might be held in Australia. Here in the U.S., children’s authors are pushing back against stereotype. Is dismantling stereotypes something that you’re conscious of doing as well?

This is a point that I raised with my editor, because when I started writing Fly, I was very worried because a lot of people talked about how Pie in the Sky is important because of immigration. But Fly has nothing about that. It could have been written by a White author with a White main character. I was worried that readers would expect me to write about [people of color] and immigration, but I didn’t want to write just about that. So I talked to my editor, and he said, “No, you should write whatever you want.” And that, for me, is really important.

But Popo! I love it when Henry says, “My grandma…only speaks to my sister and me in Mandarin, to improve our Mandarin.” I thought that was such a great detail, because it would be easy for readers to believe that Popo doesn’t speak English.

I try to think of what people think the stereotypes [are], and then when I can, I try to subvert them in a way that’s not explicit, so you’ve got to kind of look for it. I personally don’t like to read books that outwardly try to teach me things—I want to learn but on my terms, so that’s what I try to do in my books. I fight with my editor a lot about this, about messages that I convey in my books. He likes to spell things out very explicitly. I like to be subtle. So we often meet in the middle.

When in your plotting do you do the illustrations?

Usually when I’m writing, I have an idea of which part I want to illustrate. But when I’m [working on] a first draft, I just want to get everything out very, very quickly. I just jot down in my manuscript if I think that this part should be illustrated or not. And then when I revise, I analyze each decision that I make: Why should this be an image, and why should this not be an image? But it’s only when I finish writing the whole manuscript that I actually start sketching,

The moment when Henry apologizes to his father is brilliant. On one page you have the crying child and the three speech bubbles and then nothing but printed text on the opposite page.

I keep sketchbooks and journals, and I was looking through my sketchbook and I found that [when there’s] something that I’m afraid to say out loud, I will [make] a little drawing of myself, with a speech bubble coming out. That’s how I say things that I’m afraid to say, because by drawing myself I’m kind of removing me from the situation. It’s a little scarier when all I have left is words. It’s a little more vulnerable in a way.

It’s pretty funny how you give Henry’s dog, Maomi, some of Henry’s own characteristics.

I was worried that Henry comes off as a real jerk. How is the reader ever going to like this character? [So I thought] maybe I should give him a dog. And I show him caring for the dog. So that makes readers want to give him at least a chance to see maybe there’s something more to him than just a spoiled kid.

Giving him the dog was definitely a good idea. But you also establish really early on that he and his former BFF, Pheebs, had this incredibly close relationship and that it has ruptured cataclysmically.

It’s a lot easier [for me] to write a character with a trauma that’s very obvious, like a parent dying or moving to another country. Everybody would automatically sympathize with that. But when you don’t actually have anything really terrible happening to you, then it’s a lot harder.

Do you think that Pheebs and Henry will become friends again?

They will be friendly, but I don’t think they could be best friends again. I think it’s important for kids to realize that just because you lose this friend, [that] doesn’t mean you’ll never make another friend.