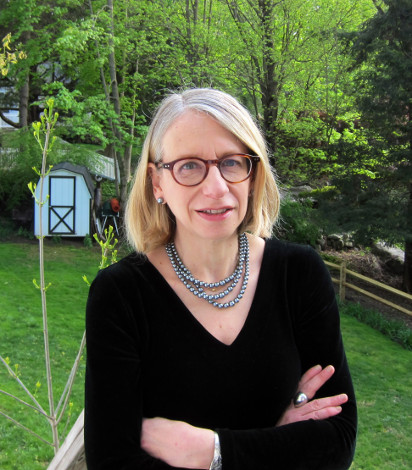 The thing about caring for her aging parents that most surprised Roz Chast was everything.

“I didn’t know anything about elder lawyers, I didn’t know about hospice. I didn’t know whether they had a will. I didn’t know how to start these conversations. I felt like I was just making it up in a sort of incompetent way as I went along,” says Chast, the New Yorker cartoonist. “As I said to somebody recently, it’s not like they have What to Expect When Your Parents Are Over 90 and Don’t Want to Move Out of Their Apartment.”

While that specific title has yet to grace self-help shelves, customers who searched for that item may enjoy Can’t We Talk About Something More Pleasant? Chast’s first memoir is exceptional: a funny, heart-rending take on an increasingly common experience, told primarily through four-color panel cartoons.

Chast was born in 1954 to George, a foreign language teacher, and Elizabeth, an assistant principal, in Brooklyn, New York. “They were a tight little unit,” writes Chast, whose drawing depicts her aged parents on the couch: “ ‘Codependent’? Of course we’re codependent!” says Elizabeth. “Thank GOD!!!” says George. They were born 10 days apart in the spring of 1912, grew up two blocks from each other and attended the same fifth-grade class. Finding three to be a crowd, their daughter fled for art school as soon as possible.

Her parents continued to live devotedly in the same Brooklyn apartment for the next three decades. It wasn’t until a 2001 visit that Chast discovered the encroachment of grime. Subsequent trips confirmed her suspicions of decline. “By 2002, they were 90, and it was hard not to notice that every time I came to see them, the grime had grown thicker....The piles of newspapers, magazine, and junk mail had grown larger...and they themselves had grown frailer,” Chast writes. “I could see that they were slowly leaving the sphere of TV commercial old age—Spry! Totally Independent!! Just Like a Normal Adult, but with Silver Hair!!!—and moving into the part of old age that was scarier, harder to talk about, and not a part of this culture.”

Were her parents no longer able to care for themselves? Who even knew what that meant? To strong-willed Elizabeth, especially, accepting help was a nonstarter. Leaving the apartment wasn’t up for debate. As Chast writes, “My mother did not ‘pick her battles,’ as parents nowadays are advised to do. And the few fights I dared to have with her, she won. She always won.”

What follows is the inevitable series of unfortunate events: George, suffering from dementia, gets lost in their own building; Elizabeth takes a nasty tumble off a step stool. In a poem written after the fall, entitled “Too Soon We Grow Old: Too Late We Get Smart,” she reflects on what went wrong: “Twas my knees that betrayed me,/As they buckled under me./This wasn’t the first time,/So just how dumb could I be?”

Chast’s humor is a delight, though she identifies more with her father, the inveterate worrier: She worries about her parents’ continuing to live alone. She worries about finding an assisted living facility closer to her Connecticut home—depicting “Sunset Gardens,” “End-of-the-Trail Acres,” “Final Bridge Rest Home” and “Last Stop: A Luxury Residence for People in Their Golden Years” as samples of the available accommodations. She worries about medical procedures, caregivers, dwindling finances and whether she’s doing enough.

“I still very frequently ask myself, did I cause, you know, everything bad? Should I have let them continue to live in their apartment? I was thinking maybe my father’s hip broke because he wasn’t used to walking around so much, and he was walking more at the place,” she says. “They’d have to walk from their room to the elevator. You just ask yourself all these questions. I guess I felt like I was doing the best that I could, but I can’t look back and say I’m sure.”

George died in 2007. “After my father died, I noticed that all the things that had driven me bats about him—his chronic worrying, his incessant chitchat, his almost suspect inability to deal with anything mechanical—now seemed trivial,” Chast writes. “The only emotion that remained was one of deep affection and gratitude that he was my dad.”

Elizabeth, suffering from diverticulitis and multiple falls, seemed to be in steady decline. Hospice was engaged. Then the next time Chast visited, Elizabeth was on the couch with her caregiver, eating a tuna sandwich. “Where, in the five Stages of Death, is Eat Tuna Sandwich?!?!?” Chast writes. “When she turned like ninety-six I asked her what she wanted for her birthday and she said ‘a car.’ She was mad because, ‘When you took my car away, you clipped my wings.’ The idea of driving in Connecticut! I don’t even like to drive on Route 7,” she says.

It was a temporary stay. Elizabeth died in 2009, and Chast includes a series of portraits depicting her mother in bed that depart from her signature style. The last bears the legend “My mother died tonight at 8:28.” She’s still wearing an oxygen tube.

“I told my daughter, who’s an artist and writer, ‘It’s all material. If I’m ever relegated to that, should you feel so inclined, feel free to take notes,’ ” says Chast.

Funny, a little grim, frustrating, mournful: Can’t We Talk about Something More Pleasant? presents a mix that seems true to the experience—a clue-in for those who have yet to understand firsthand and a comfort to those who do. “You’re not alone if you feel like you’re going to lose it or you’re at the end of your rope, that you’re not going to be able to stand it—because you will, you’ll stand it. It’s just a hard thing,” she says.