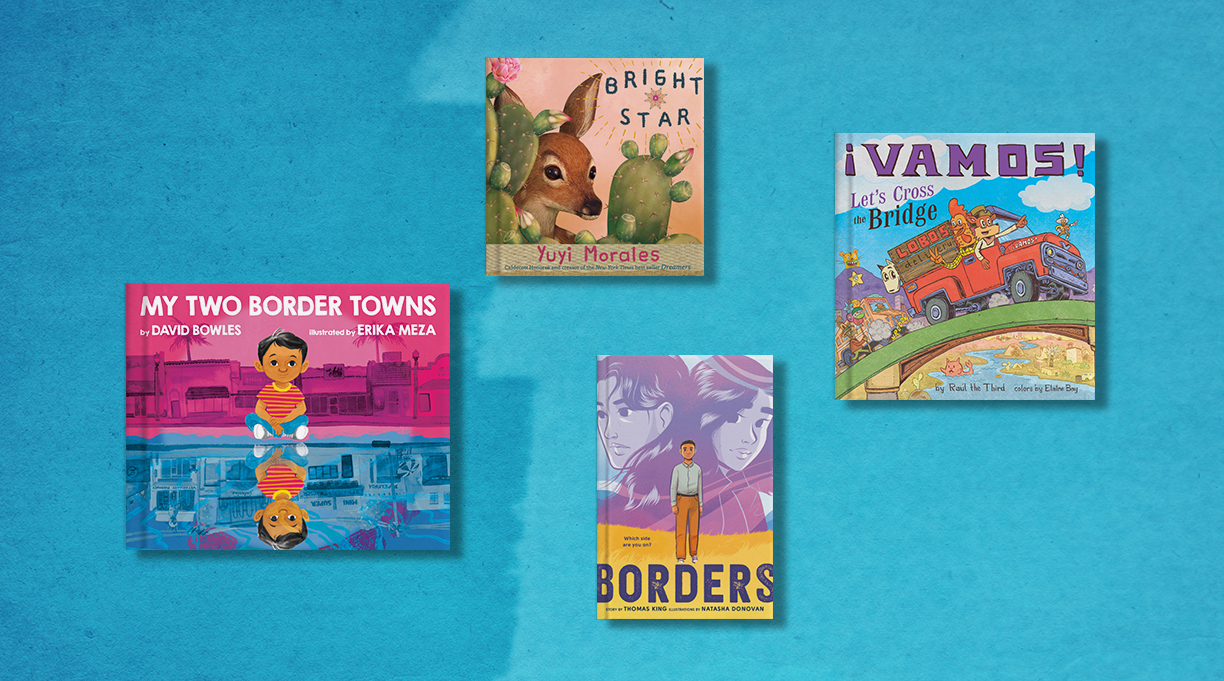 National borders are places of transition laid across the landscape, sometimes congruent with geographic features and sometimes wholly arbitrary. Who gets to pass over and who doesn’t is a question that may seem natural to adults, but to kids it’s not so clear.

Three new picture books consider questions of passage at the United States–Mexico border. In Bright Star (Neal Porter/Holiday House, Sept. 7), Yuyi Morales’ eponymous protagonist, a white-tailed deer fawn, finds its way across the Sonoran Desert inexplicably blocked by a concrete wall topped with barbed wire; the final pages depict brown-skinned children, drawing connections between them and the desert animals, wrapping them all in a protective embrace. In My Two Border Towns (Kokila, Sept. 14), David Bowles depicts a transnational community that straddles the border; his protagonists, a father and son, cross freely from the U.S. to Mexico and back, visiting relatives and delivering necessary supplies to the migrants camped on the Mexico side of the bridge, waiting and hoping to cross over someday. (Read our recent interview with Bowles.) And in ¡Vamos! Let’s Cross the Bridge! (Versify/HarperCollins, Sept. 21), author/illustrator Raúl the Third and colorist Elaine Bay send Little Lobo and his pals across the bridge from El Paso to Juárez (unnamed but recognizable in the art, a sort of cuddly psychedelia) for a party—at least, they mean to cross, but when traffic holds them up, they have the party right there on the bridge. All three books are stellar, giving readers different, valuable lenses through which to regard the U.S.–Mexico border.

Another extraordinary title takes somewhat older readers to the U.S.–Canada line: Borders (Little, Brown, Sept. 7), by Thomas King (of Cherokee and Greek heritage) and illustrated by Natasha Donovan (Métis). Adapted from King’s 1993 short story of the same name and opened up beautifully with Donovan’s gorgeous, empathetic art, it relates the experiences of a Blackfoot mother and son (the narrator) as they travel from their reserve in Alberta to Salt Lake City to visit the narrator’s older sister. Since reluctantly bidding her daughter goodbye, the narrator’s mother has been quietly proud of her offspring’s success but has declined to visit. Then one day she gets two new tires, puts on her best dress, and has her son “dress up, too” so they won’t look “like Americans.” They pack a cooler full of food, bring some blankets, and head south. At the border, they pass the duty-free store and reach the American border-control booth. The guard asks their citizenship. The narrator’s mother answers, “Blackfoot.” The guard tries to clarify: “Canadian?” The mom answers, “Blackfoot.”

What unfolds from here is a quiet exposure of the cosmic absurdity of a border imposed on a people who preexisted it. Multiple U.S. border guards ask the travelers’ citizenship, but the mother’s response never varies. “It didn’t take them long to lose their sense of humor, I can tell you that,” the narrator comments dryly. After a day spent at the U.S. border booth, mother and son turn around and head back toward Canada. At the Canadian booth, the talkative, friendly border guard asks, “Where are you coming from?” The mom answers: “Standoff.” Then she reveals their citizenship: “Blackfoot.”

Refused passage into either nation, mother and son spend multiple days in this nowhere-land between border-control booths, eating the food they’ve brought and wrapping themselves in their blankets at night. They make friends with Mel, the guy at the duty-free shop. And the resolution of their story—which involves mother and son’s masterful handling of news media—makes for a final layer of irony on an already-teetering stack.

In their different ways, all four books speak to the same theme—brilliantly.