Seven Reasons Why 2014 Was a Great Year for Picture Books 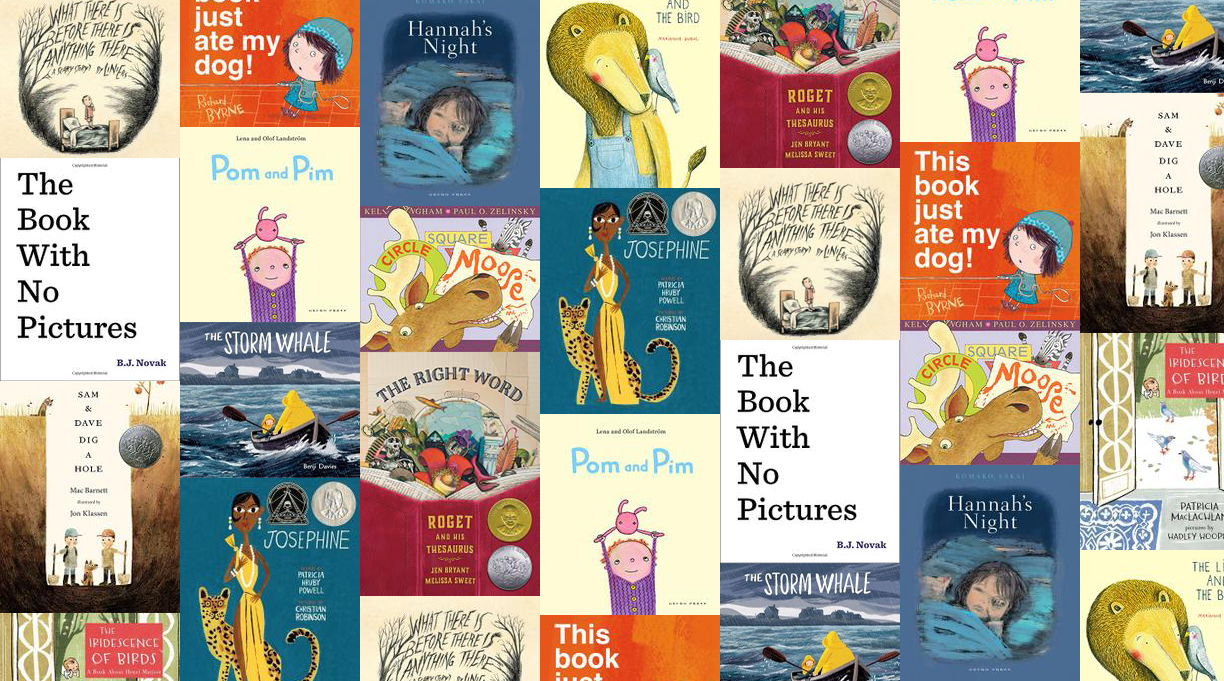 Happy 2015 to one and all! At the time of this writing, it’s actually the final day of 2014, and I thought it’d be fun to look back on the year in picture books. I don’t intend to declare anything formal or terribly succinct about the year. (Arguably, one would need a bit more time to pass in order to make such grand pronouncements.) Instead, I’ve been thinking about the ways in which it was a good year for picture books. And since my own blog is called Seven Impossible Things Before Breakfast, let’s look at the seven ways in which it was a good year for them (though I write this well after breakfast, if we’re going to be honest about it).

1. The Caldecott contenders. The big awards, the ALA Youth Media Awards, will be announced on Monday, February 2, and this includes the Caldecott, the award given to “the artist of the most distinguished American picture book for children.” Let us not forget the other awards given to picture books (or that can be given to picture books), such as the Coretta Scott King Award, the Sibert Medal, the Geisel Award, the Pura Belpré Award, etc. What an exciting day this is every year, a day that celebrates (in part) the unique art form that is the picture book—and much, much more. (Here’s the webcast info, if you’re not going to be at Midwinter in person. Check out the countdown there!) I could be heard saying a few months back, “has this been a slow year for picture books? It seems like we don’t have as many strong contenders.” But, no, I was wrong. If you read up on what most people generally agree are the 2015 contenders (though you never know what underdog book might pop up and win), it’s been a good year for picture books—thanks to the likes of Marla Frazee, Christian Robinson, Melissa Sweet, Sergio Ruzzier, and many others.

2. See that short list of names right up above there? In some cases, that doesn’t include the authors (since I was talking about an award given to artists). We saw some great writing this year—from Patricia Hruby Powell’s rhythmic and reverent Josephine to Jen Bryant’s meticulously researched The Right Word to what is probably my favorite picture book text of the year, Patricia McLachlan’s The Iridescence of Birds: A Book About Henri Matisse. I could go on.

3. The We Need Diverse Books campaign was created in April of this year after Ellen Oh and Malinda Lo tweeted their frustration with the lack of diversity in children’s literature, specifically in response to the panel of children’s authors assembled for BookCon’s May event—an all-white (and even all-male) panel. The campaign raised a lot of money in this, their first year. (They always need more, though. Have you donated yet?) Since we need more diverse picture books, too, this campaign is entirely good.

4. Picture book imports. We saw a lot of intriguing books from overseas this year—from Marianne Dubuc’s expertly crafted tale of friendship in The Lion and the Bird to Komako Sakai’s Hannah’s Night to Benji Davies’ The Storm Whale. My very favorite may be Pom and Pim from Lena and Olof Landström. If you haven’t read Pom and Pim to your favorite child yet, take some time to do so in 2015.

5. There were some new picture book blogs this year, including Art of the Picture Book, created by graphic designers who are exploring children’s book design and illustration. Hubba whoa, it’s good stuff. See what I mean? You can throw a rock and hit a YA blog (a good thing, to have so many choices), but it’s not often that you see picture book blogs rear their heads.

6. 2014 saw some picture books that weren’t afraid to get existential, such as with Liniers’ wonderfully bizarre and emotionally raw What There Is Before There Is Anything There: A Scary Story, which I wrote about here at Kirkus in August. Depending on what you think happens at the tail end of Mac Barnett’s Sam and Dave Dig a Hole, illustrated by Jon Klassen (which I was also moved to write about this year), things got really existential there, too. In 2015, we’ll see more of this; I’ve seen an early copy of a picture book import, Heinz Janisch’s The King and the Sea, illustrated by Wolf Erlbruch and coming to the U.S. in 2015, which is a series of hyper existential (and extremely) short stories, originally released in Germany in 2008.

7. Picture books also weren’t afraid to “go meta” this year, as Mark Levine wrote about at the New York Times in November. The examples he cited include B.J. Novak’s best-selling picture book, The Book With No Pictures; Richard Byrne’s This Book Just Ate My Dog!; Kelly Bingham’s Circle, Square, Moose, illustrated by Paul O. Zelinsky (they chatted with me about this book in October); and more.

I am excited about the Youth Media Awards on 2/2. And, needless to say, I can’t wait to see what 2015 brings in the realm of picture books, and I hope you’ll explore it with me.

P.S. Did I miss anything else Wonderful About Picture Books in 2014? If so, please leave a comment!