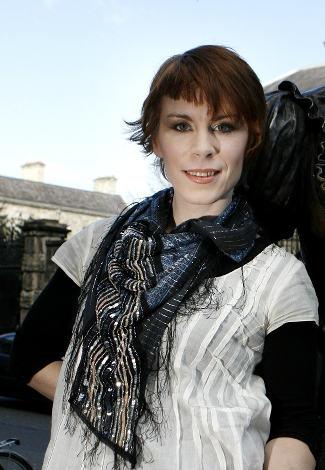 In the starred review of Tana French’s latest novel, The Secret Place, Kirkus warns that “everyone in this meticulously crafted novel might be playing—or being played by—everyone else.” This fifth novel by the Dublin-based novelist and former actress is a marvelous book and something of a departure for her. While it remains squarely rooted within the Dublin PD’s elite murder squad, the sections written in the third person effectively immerse us in the dark, secretive lives of a gang of teenage girls.

The novel brings back now 16-year-old Holly Mackey, the daughter of the manipulative detective Frank Mackey who figured prominently in French’s novel Faithful Place. Holly is now a student at the exclusive St. Kilda’s School, where a handsome boy named Chris Harper, a student at the neighboring boys’ school, has been murdered. In an attempt to control the ferocious gossip at the school, St. Kilda’s has installed a kind of physical social media in the form of a bulletin board known as “The Secret Place.” As the novel opens, Holly has brought a bit of evidence from The Secret Place to the attention of Detective Stephen Moran, her father’s former partner.

On the phone from Dublin, French reveals that her inspiration for the new novel came when she discovered the innovative, online art project known as PostSecret, where contributors anonymously post about their darkest skeletons.

“The variety of stuff on there that people want to reveal anonymously is really dark and sad,” she says. “It taps into two really deep and contradictory human urges. There’s the urge to reveal all your secrets and become that deeply and intimately known, but there’s also that urge to keep your secrets inviolate. PostSecret is amazing because it allows you to indulge both of those urges at once.”

“Then I got to thinking that the time in life when these needs are at their most intense is adolescence,” she continues. “It’s all about your secrets, what you’re thinking, what you’re doing, who you fancy. It’s all about secrecy and what you do with it. Of course, I write crime, so obviously my mind is going to try to find a way to fit a dead body in there, asking what if a teenager used a site like this one to reveal what he or she knew about a murder? And it took off from there.”

Although French has children of her own, she had to get creative to capture the unique patois of Dublin’s angst-ridden adolescent girls.

“I’m right at that age where I’m too old to know any teenagers but I’m too young for me and my friends to have teenage kids,” she explains. “So I kind of sinisterly lurked around bus stops when school got out in the afternoon to edge close enough to hear these teenage girls’ conversations. I must have seemed incredibly dodgy but this is the thing about teenagers: They don’t notice some woman hanging about in the slightest. I guarantee you I could have lurked at a bus stop for an hour and not one teenager would be able to describe me. Anything outside their world just doesn’t exist.”

In an age when social media has exploded to include everything from Vine to Second Life, I had to ask what on Earth possessed French to make her outlet a physical location.

“I thought it was less interesting if it was online,” she says. “I love what an interesting location does to the action and the people around it, the focus that it provides. There’s something different about a website like PostSecret where anyone and everyone can drift in and out. It has a different kind of intensity and power from a place where you have to be physically present in order to interact with it or even have any knowledge of it. The idea of these girls going past this board every day, trying to sneak in their secrets and look at other people’s secrets, creates a hum and an intensity that a cyberspace wouldn’t have in the same way.”

To solve the mystery surrounding the death of Chris Harper and the involvement of Holly and her friends, French enlists two detectives cut from very different cloth. Stephen Moran is ambitious, graceful, and drawn to the glamour and exclusivity of St. Kilda’s, not to mention the opportunity to exchange Cold Cases for a spot on the Dublin Murder Squad. But his assigned counterpart turns out to be Antoinette Conway, a brittle and contemptuous homicide detective who is her own worst enemy.

“It would make sense that they would get on,” French says. “They’re both working-class, urban professionals in a country where being a cop is generally a rural profession. They’re both ambitious and focused and yet they don’t get on, at first. Friendship is like any great love—it creates you and carves you. Stephen is not at all into the idea of having someone like Antoinette define him in any way, because she’s everything that he’s trying to get away from. But by the end of the book, something has shifted in Stephen where he falls for the beauty of the girls’ friendship in a way, but it takes him a long time to realize that the inherent beauty there isn’t a function of the elegance around St. Kilda’s. It’s a function of the friendship itself. By being friends, partners, something important with Antoinette, it gives him an opportunity to create that beauty as well.”

The book, which has something of a supernatural tone to it, was praised by no less than Stephen King, who recently tweeted, “Read The Secret Place, by Tana French, when it comes out. You'll understand then. Great book.”

“With the supernatural elements of the book, I tried to make it carefully clear that everything that happens has both a supernatural explanation and a perfectly natural explanation,” she says. “All of it could simply be a healthy dose of bad wiring and hysteria. I think that happens much more in a place like St. Kilda’s where they’re trying to do everything in a controlled, safe way. They have their secret place and a shrine where people can light candles for Chris Harper. That’s when things bubbling under the surface are going to explode in ways that are incredibly hard to predict and can get very, very dangerous.”

Clayton Moore is a freelance writer, journalist, book critic, and prolific interviewer of other writers. His work appears in numerous newspapers, magazines, websites and other media. He is based in Boulder, Colorado.