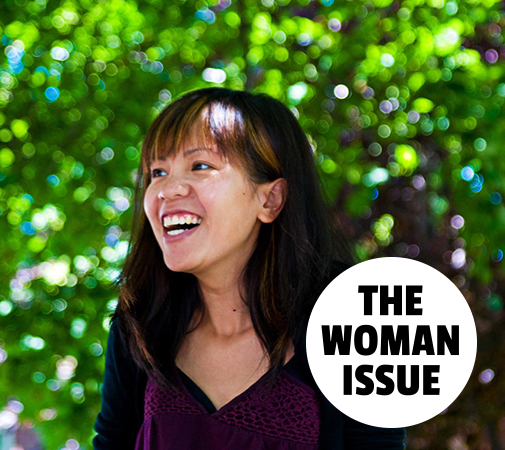 Thao Lam was only 3 when her family left Vietnam for Canada. She barely spoke English, but the library quickly became her favorite place. “You don’t need to know the language to read a children's book, right?” she says. “There's all these beautiful pictures and beautiful artwork in it.” She could create her own stories from the pictures.

Ever since, Lam has wanted to illustrate children’s books. She went to art school, where she discovered an affinity for collage, and then became an art buyer for educational publishers. She treated the job as an education, giving her the chance to talk to illustrators and understand their work, while continuing to work on creative projects at home. That work eventually paid off, and she published her first book in 2016.

Her latest book, Wallpaper, tells the story of a young girl who discovers a whole world inside the wallpaper of her new home. Lam creates an engrossing paper world full of intricate landscapes, crowds of critters, and one very adorable monster. Oh, and she does it all almost entirely without words.

As impressive as that is, visual storytelling comes naturally to Lam. She always starts with an image, in this case of someone sitting in a room alone when they notice a fluttering from the corner. “If I'm curious about this image, then other readers might be curious too, and it might intrigue them enough to continue on with the story,” she says. From there, she expands the idea, asking questions about what’s happening and why and where it’s going, until she has a whole movie in her head. Then she can pick out the images that are really vital to the story.

If this sounds like a lot of work, well, it is. It doesn’t help that Lam does everything by hand. For Wallpaper, that meant designing and drawing every sheet of paper she needed for her detailed cut-paper images. But, she says, “I'm the kind of person where once I have an idea, I need to follow through, so if it was going to take 100 sheets, that was what I was gonna do.”

Nonetheless, Lam enjoys the work. “There’s something soothing about working with my hands,” she says. “I zone out for hours without realizing that I've passed lunch and dinner.” The amount of care Lam puts in is obvious in the art, with the multiple layers of patterned paper creating a detailed, immersive world.

Despite its art’s complexity, Wallpaper’s story is necessarily a simple one. Having just moved into a new house, the main character feels lonely but is too shy to talk to the neighboring kids, until an encounter with a monster shows her that other people aren’t as scary as she thought. The struggle to make friends is a familiar one for Lam. “I have a hard time interacting with people because I'm really on the shy side,” she says. “So when I was a kid, it was a really hard thing for me to overcome, and I really didn't [learn to make] friends until I was in my 20s.”

Another thing Lam has in common with her character is her appearance—the little girl has brown skin and dark hair. Originally, though, Lam planned to make the protagonist a redheaded boy. “I thought that might be really fun to draw, but I didn't feel that it was right,” she says. Instead, she wanted to reflect her own experiences and world.

Still, the book leaves a lot up to the reader. “At the end of everything,” Lam says, “you kind of have to leave it in the reader's hands to interpret it their way.”

Alex Heimbach is a writer and editor living in Los Angeles.