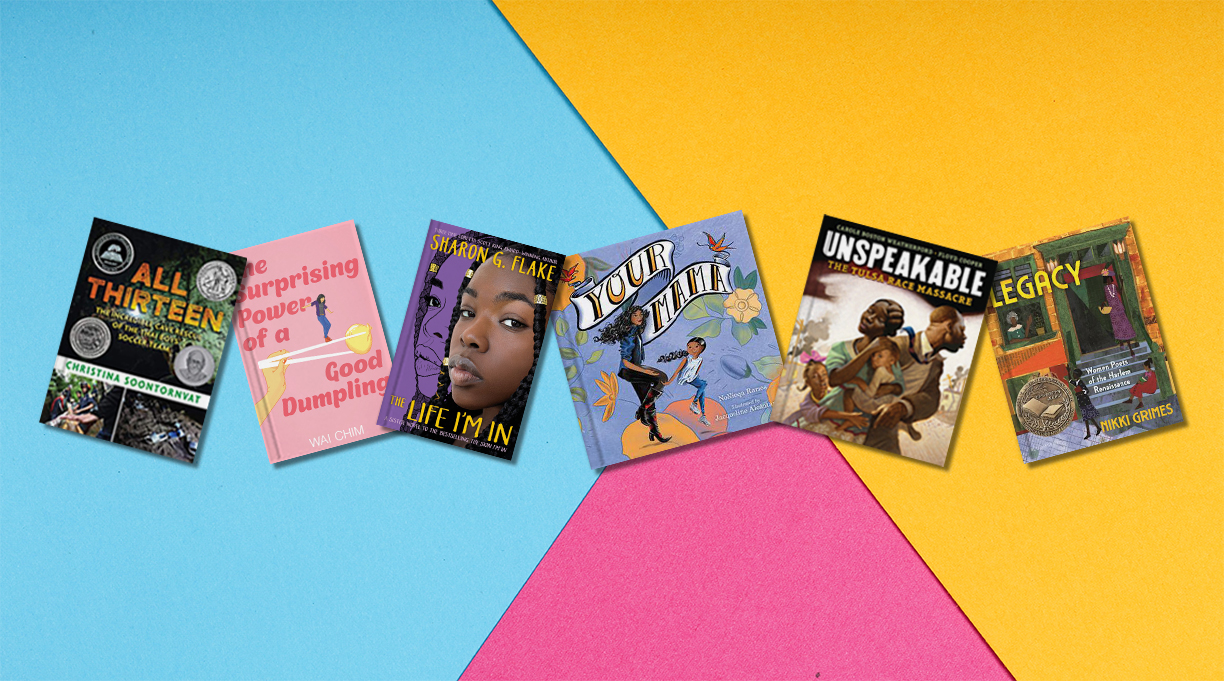 Each year, the late summer brings the culmination of over nine months of diligent reading by our Kirkus critic and bookseller or librarian judges. As young readers’ editors, Vicky Smith and I have been busily trying to keep up with them, enjoying diving into the wealth of eligible titles: books published between Oct. 1, 2020, and Sept. 30, 2021, that have received a Kirkus star. Now, librarian Chrystal Carr Jeter and critic Amy Robinson have selected the six finalist titles, two each in the categories of picture books, middle grade, and YA. Next month I will join them, along with author judge Naomi Shihab Nye, a multiaward-winning poet and the current Young People’s Poet Laureate, to select one winner. The Kirkus Prize offers an opportunity to honor a slate of titles representing a sampling of some of the best literature for young people.

Your Mama by NoNieqa Ramos, illustrated by Jacqueline Alcántara (Versify/HarperCollins): This lively and joyous picture book uplifts children who rarely get to see their families celebrated in print, flips the script some have absorbed, and reflects children’s rose-tinted perceptions of beloved adults. It includes all the wit and wordplay of “yo’ mama” jokes but with an empowering twist as it follows a Latina mother and daughter through the ups and downs of daily life.

Unspeakable: The Tulsa Race Massacre by Carole Boston Weatherford, illustrated by Floyd Cooper (Carolrhoda): This stirring picture book is a tribute to “Black Wall Street,” the prosperous neighborhood of Greenwood in Tulsa, Oklahoma, destroyed in 1921 by a violent White mob. Author Weatherford and late illustrator Cooper, whose grandfather survived the massacre, combined their prodigious talents in this stirring work that eloquently portrays the community and its subsequent devastation.

Legacy: Women Poets of the Harlem Renaissance by Nikki Grimes, illustrated by multiple artists (Bloomsbury): Prolific, celebrated poet Grimes is joined by 19 talented Black women artists in this compilation that presents the work of Harlem Renaissance women poets alongside poetic responses to their writing in the golden shovel form. This versatile, inspiring collection is a feast for the senses that will appeal equally to casual readers and educators.

All Thirteen: The Incredible Cave Rescue of the Thai Boys’ Soccer Team by Christina Soontornvat (Candlewick): In 2018, the world was riveted by the unfolding drama of 12 soccer players and their young coach who were trapped underground in a flooded cave in northern Thailand. Soontornvat presents a gripping, comprehensive, extensively researched, and culturally informed work that informs readers on a tremendous range of topics while never losing sight of the thrilling central narrative.

The Surprising Power of a Good Dumpling by Wai Chim (Scholastic): Chinese Australian teen Anna Chiu is juggling a lot. Her immigrant parents’ restaurant is struggling, and her hardworking father is often absent. Her mother’s untreated mental illness wreaks havoc at home, leaving Anna to parent her younger siblings as well as keep up with her schoolwork. This is an honest, devastating, nuanced look at a family in crisis.

The Life I’m In by Sharon G. Flake (Scholastic): This stand-alone companion to Flake’s award-winning The Skin I’m In (1998) follows Char, a frustratingly impulsive yet achingly sympathetic 16-year-old. While traveling by bus to Alabama to live with her grandparents, Char takes on responsibility for a fellow teen’s baby and falls prey to a sex trafficker. This powerful novel is sophisticated in its treatment of a critical issue and the path to healing.