‘The Last Letter from Your Lover’: Ordinary Love 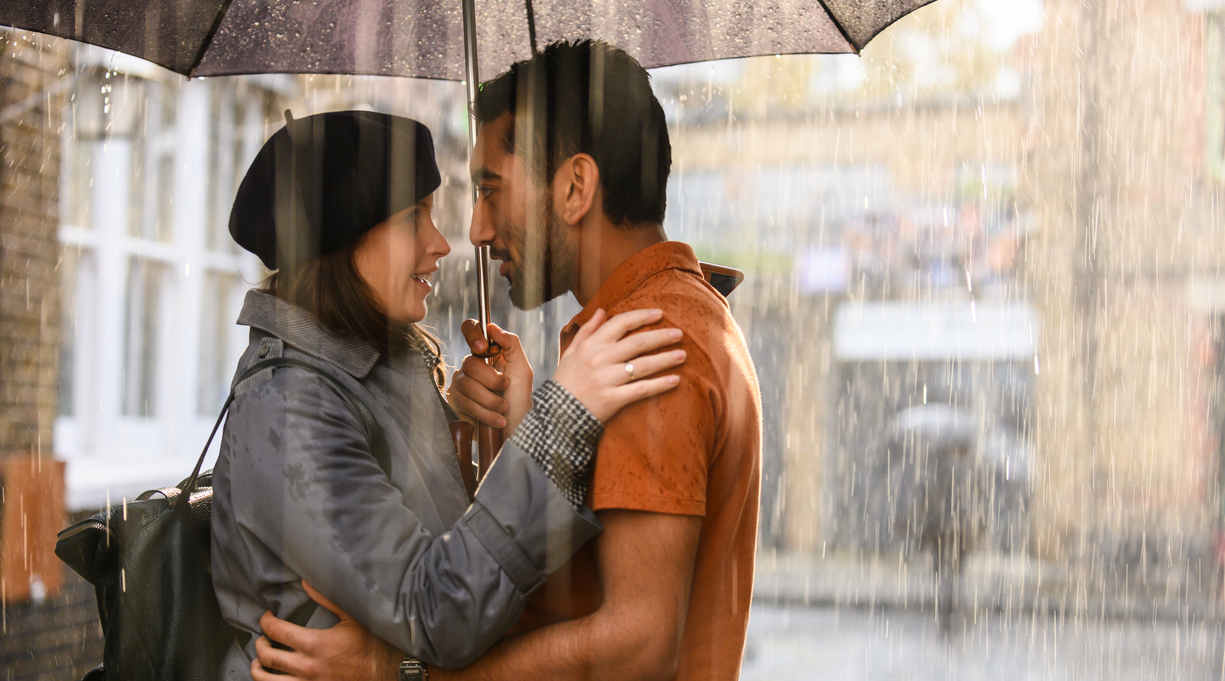 Felicity Jones and Nabhaan Rizwan in ‘The Last Letter from Your Lover.’ Photo by Parisa Taghizadeh/Netflix

The effect of Mad Men on historical dramas set in the 1960s can’t be overstated. The AMC series, which ran from 2007 to 2015, was well-known for its stylish sets and costumes, and its bright Technicolor aesthetic called to mind sweeping melodramas by Douglas Sirk, director of All That Heaven Allows and Written on the Wind. Other TV series set in roughly the same timeframe, such as ABC’s Pan Am and Amazon Prime Video’s Good Girls Revolt, had similar visual styles, as does Amazon’s popular ongoing series The Marvelous Mrs. Maisel and its original film Sylvie’s Love, a romantic drama that’s currently up for an Emmy Award. Indeed, the style has become a sort of shorthand—an appealing way to conjure up an era in an instant.

The new Netflix film adaptation of Jojo Moyes’ Kirkus-starred 2011 novel, The Last Letter From Your Lover, also takes place, in large part, in the mid-1960s—but it looks nothing like Mad Men or its stylistic descendants. There are no bright colors here; instead, there are mostly muted grays, dirty browns, and a gauzy haziness, as if the cameraman smeared Vaseline on the lens for every scene. It seems as if director Augustine Frizzell and cinematographer George Steel did their level best to avoid looking like Mad Men, but in their zeal, they managed to make everything look as unpleasant as possible. It’s so muddy looking that it becomes a chore to follow the plot.

And it’s a soapy plot, indeed. As the story opens, Jennifer Stirling (played by Shailene Woodley) is recovering from a car accident that left her, improbably, with complete and total amnesia. She remembers nothing about her life—not even the state of her relationship with her husband, a wealthy, aloof businessman (Mary Queen of Scots’ Joe Alwyn). Then she discovers an old love letter, addressed to her and signed with the initial “B” by someone who’s definitely not her husband. As she investigates further, flashbacks reveal the identity of her past lover: journalist Anthony O’Hare (Emma’s Callum Turner), whom Jennifer called “Boot,” after the hero of the 1938 Evelyn Waugh novel, Scoop. Her marriage, it turns out, is joyless and unsatisfying, while her affair with Anthony was passionate and electric. Indeed, Anthony asked her to leave her spouse and run away with him to New York City, but when she didn’t show, he assumed that she decided to stay with her husband. In fact, she was on her way to meet him when the car accident occurred. As years go by, a series of misunderstandings and complications manage to keep them apart.

Another plotline, set several decades later, follows Ellie Haworth (Felicity Jones), a London journalist who stumbles upon one of Anthony’s letters to Jennifer in a newspaper archive; she’s so swept away by its deathless prose (“Know that you hold my heart, my hopes in your hands”) that she decides to track down the couple. At the same time, she navigates a tentative relationship with a newspaper archivist named Rory (Informer’s Nabhaan Rizwan).

The film follows the events of the book fairly closely, although there are a few changes; for example, the film moves back and forth between the 1960s and the modern day, while the novel puts all of Ellie’s story toward the end. The movie also excises several minor plot elements; for example, in the book, Ellie is in the middle of a long-running affair with a married man, which complicates things with Rory, but the film has her recovering from a complicated breakup, instead. Jennifer’s husband also figures much more in the novel, while in the movie, he barely appears. None of this hurts the film; Moyes’ rather convoluted plot benefits from a bit of streamlining.

The movie’s flaws lie in other areas. First and foremost, Turner, as Anthony, is completely miscast; the book’s devil-may-care character is rather charming, but the actor who plays him just doesn’t have the presence to carry it off. It’s hard to imagine anyone falling in desperate love with Anthony, as portrayed here; he’s just not that interesting. Woodley does what she can, but there’s just no chemistry on screen, and it drags the whole film down. (Ben Cross and Diana Kent, as the elder versions of the same characters, are a bit more convincing.) Viewers will find themselves impatiently waiting for Ellie and Rory’s scenes, as Jones’ and Rizwan’s appeal fairly leaps off the screen. Their scenes are fun, and funny, which can’t be said about any of the other couple’s interactions.

The very end of the film spins up a clever what-if scenario, but it’s safe to say that viewers will have what-if questions of their own. What if this tale of star-crossed lovers was set in a gorgeous, colorful ’60s tableau instead of a blurry mess? What if there were an alternate version of this film, one where Jones and Rizwan were cast as Jennifer and Anthony? What if the filmmakers made different decisions? What if, indeed.