Back to Nature With Novelist Benjamin Percy 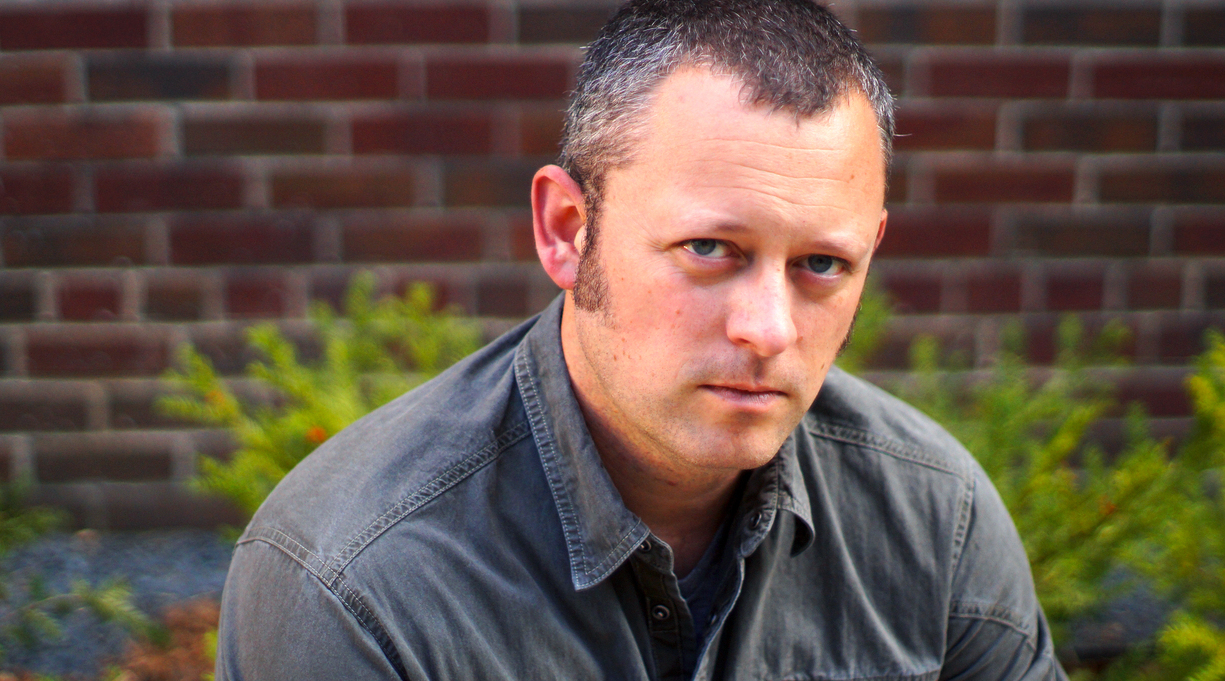 From his first short stories to his latest novel, Benjamin Percy has always found inspiration in the natural world. The Minnesota-based author, who grew up “off the grid” in Oregon, comes by it honestly.

“My parents were back-to-the-landers,” Percy says. “Twenty-seven acres of big pines outside of Eugene is where I spent the first six years of my life. We had a vegetable garden and fruit trees that my mom cultivated, and all the meat that we ate either came from our chicken coop or the animals my dad hunted, so I grew up on venison, elk, and bear.

“That’s why I sound like this,” Percy adds, in his commanding but friendly basso profundo. “A healthy diet of bear.”

Percy returns to the woods of the Pacific Northwest in his new novel, The Unfamiliar Garden (Mariner Books, Jan. 4), which follows Jack, a biologist whose daughter, Mia, has gone missing in the Olympic National Forest in Washington after a meteor shower. Jack and his homicide detective ex-wife, Nora, investigate a parasitic fungus that popped up in the wake of the meteor shower and that could lead them to their missing child.

The Unfamiliar Garden is the second volume in a trilogy that began in 2021 with The Ninth Metal. Percy says his love of science fiction inspired what he calls the Comet Cycle.

“I wanted to build my own shared universe,” Percy says. “You could think of the trigger event for this universe as an age-old sci-fi concept: A comet comes streaking through the solar system; the planet spins through the debris field. We are introduced to new elements that upend the laws of physics, geology, biology; that create chaos in the geopolitical theater.”

Percy is no stranger to science. His mother is a botanist who once worked for the U.S. Forest Service and passed on her love of biology to her son. He did his own research for The Unfamiliar Garden, consulting scientists at the Wolf Creek Environmental Center in northern Minnesota and at Carleton College in Northfield, Minnesota, near where he lives. What he learned was fascinating, if a little unsettling.

“Pathogenic fungus takes up an estimated 3,000 acres in eastern Oregon in the Blue Mountains, and it’s estimated to be over 8,000 years old,” he says. “Botanists have tried to find the edge of this fungus, but there is no edge because it’s ever expanding.…In the novel, I’ve got this otherworldly fungal organism that comes from the comet’s debris, and it’s using people as an adaptive vessel. Building off actual science, I have slippery science. There are no aliens, plural. There is an alien, singular, the mycelium, a fungus that’s spreading among us and creating this united intelligence. I guess you could think of it as like a contemporary version, a revisionary version, of Invasion of the Body Snatchers in that way.”

Like many of Percy’s novels—Red Moon, The Dead Lands, The Dark Net—The Unfamiliar Garden isn’t easy to classify, blending elements of thriller and science fiction. And while he doesn’t consider it a horror novel per se, he acknowledges there are some terrifying elements. That’s in character for Percy, who once told an interviewer for Powell’s bookstore in Portland, Oregon, “I love nightmares. I wish I had more of them.”

“A nightmare is appealing for the same reason that a horror movie or a horror novel is appealing, because it’s a safe way of tackling your fears,” he explains. “You can face savagery and emerge at the other end unscathed and process trauma. There’s something about that vivid realization of horror that leaves you jittery and spent in the end but also relieved that you’ve made it out alive.”

The books in Percy’s Comet Cycle, which is scheduled to conclude in June with The Sky Vault, share the same universe but can be read independently of one another—a narrative decision that came from another of Percy’s great loves: comic books.

“Comics were the definitive reading experience of my childhood,” he explains. His mother would take him with her to the general store—the town of Crow, Oregon, was too small for a grocery store—where fantastic worlds awaited him on spinner racks. If he behaved while his mom shopped, he’d get to take one home.

“I can remember every comic book I’ve ever purchased and read going back to the time I was 2, and that’s because I read them over and over and over again until they fell apart in my hands [and] I Scotch-taped them together.”

Comic books, of course, feature a low price and a serial format, and that’s what Percy wanted for the Comet Cycle: a way for prospective readers to enter the world he created without having to shell out for an expensive hardcover.

“I think it’s a little bit backward to start off with a $37 hardback,” he says. “I wanted to flip the rollout and have the books come out initially as cheap paperbacks to help build word of mouth, to get people excited, and then later on, they’ll all be collected into a hardcover omnibus with bonus material, like additional short stories and even illustrations.”

Percy has written his share of comic books, including stints tackling characters like Wolverine, Green Arrow, and Batman. He’s by no means done with the form—in February, Marvel will publish the first issue of Ghost Rider, written by Percy and featuring art by Cory Smith.

He’s also branching into a new field—well, kind of. While Percy has experience screenwriting, the projects he’s worked on have been largely ill-fated. On his website, he lists three of them, each ending with a variation on the sentence, “Alas, it died in development hell.”

Not so with Summering, a film Percy wrote that’s set for release in the U.S. by Bleecker Street. Directed by James Ponsoldt (The Spectacular Now), the movie follows four young girls as they embark on an adventure in the months before they start middle school. The movie, Percy said, was inspired by his daughter.

“It’s meant to replicate the adventurous spirit of The Goonies and The Hobbit and Stand By Me, these adventurous stories from my childhood, which I shared with her excitedly. And though she enjoyed them, she also said, ‘Where are all of the girls?’ ” he explains. “I set out to write a story for her, and it’s got some spooky moments to it, and it’s got some harsh truth embedded in it, but it’s a much more lighthearted spirit than a book like The Unfamiliar Garden.”

Percy’s latest book might not be lighthearted, but with its theme of a biological contagion that threatens humanity, it’s definitely timely. That’s no accident, Percy says; he started writing the novel after the Covid-19 pandemic hit last year.

“If you’re able to make somebody fall in love with a story and draw them in emotionally and raise some [important] subjects, but in a slanted way—that’s what Emily Dickinson said, was to tell it slant—then people aren’t conditioned to immediately push the topic away,” Percy says. “They’re in a pot that’s slowly heating up to a boil, and by the end, maybe you’ve moved some hearts and changed some minds.”