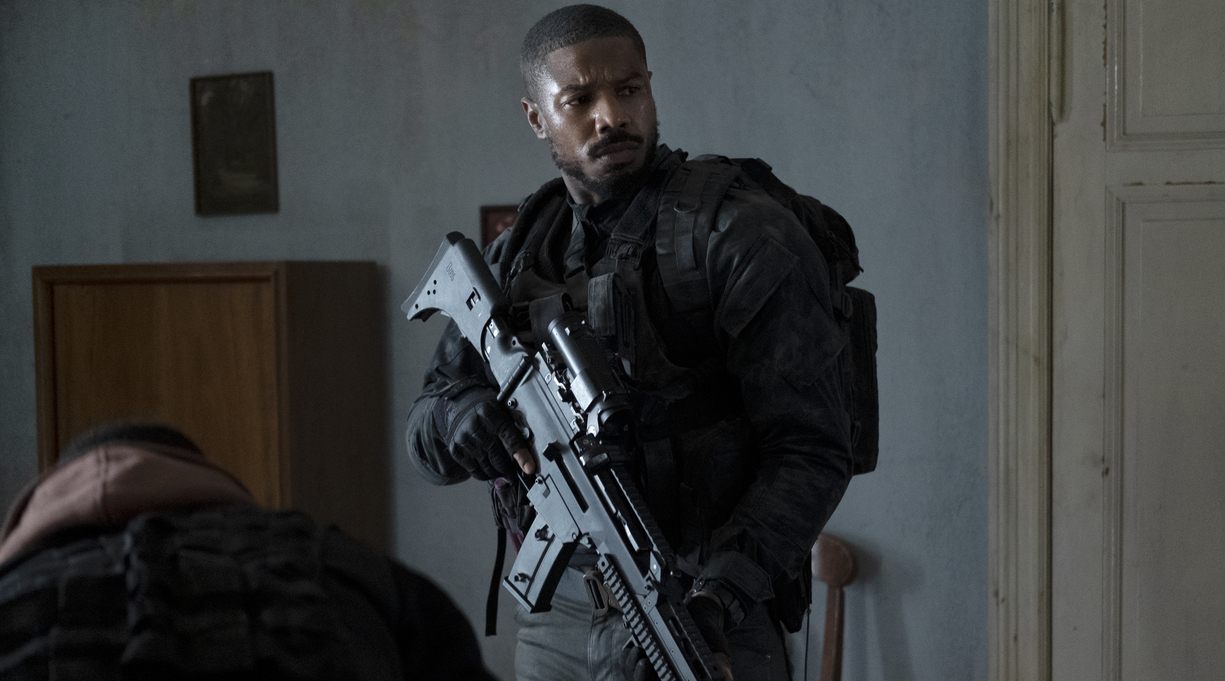 Michael B. Jordan in ‘Tom Clancy’s Without Remorse.’ Photo by Nadja Klier/Paramount Pictures

One might expect an Amazon Prime Video movie titled Tom Clancy’s Without Remorse to be an adaptation of, well, Tom Clancy’s Without Remorse—his 1993 bestseller of the same name. To be fair, the book and movie do share a few elements; both feature an action-hero named John Kelly, as well as characters named Pam, Ritter, and Greer. And, yes, there’s a Russian element to both plots. But that’s where the similarities end—and, unfortunately, both tales are unsatisfying in different ways. The film, which stars Michael B. Jordan, Guy Pearce, Jamie Bell, and Jodie Turner-Smith, premieres on the streaming service on April 30.

Clancy’s novel takes place in the same fictional universe as the author’s Jack Ryan techno-thrillers, which began with the 1984 bestseller The Hunt for Red October. Several of those books feature a secondary character known as John Clark—a CIA operative and former Navy SEAL whose name was John Kelly before he adopted a new identity.

Without Remorse is Kelly’s origin story, and as such, it largely takes place in the early 1970s. Within the first few pages, Kelly’s pregnant wife dies in a car accident; six months later, he picks up a hitchhiker named Pam Madden and invites her onto his boat on Chesapeake Bay, where they quickly become intimate and, improbably, fall deeply in love. It’s soon revealed that she has a pill habit, and that she’s a former sex worker on the run from a dangerous Baltimore drug dealer and pimp named Henry Turner; before long, one of Henry’s associates shoots Kelly with a shotgun and kidnaps Pam, who’s tortured and killed. After Kelly recovers, he sets out to wreak revenge on Henry and his crew and rescue other women who’ve been victimized by him.

Meanwhile, in a separate plot, U.S. Air Force Col. Robin Zacharias is a prisoner of war in Vietnam who’s being interrogated by a Soviet officer for classified information. A vice admiral whose son Kelly once saved asks Kelly to go on a secret mission to rescue Zacharias and other captured soldiers. For the mission, which brings him into contact with Rear Adm. James Greer and CIA agent Robert Ritter, they give Kelly a new name: John Clark.

Clancy, who died in 2013, seems to have been most at home when describing technology, which is no surprise from an author who popularized the techno-thriller. Here’s his take on a drone, for instance: “The Cody-293 was a sporty-looking beast.…Blankets of RAM—radar-absorbing material—were integral with the wing surfaces, and the air intake was screened to attenuate the radar return off the whirling engine blades.” But the relationship between Kelly and Pam (whose legs and take-charge manner are both described as “feminine”) is completely unconvincing; it’s abundantly clear that the only reason she exists in the story is to kick off the revenge plot—a classic example of fridging, in which a female character dies simply to provide angsty motivation for a male character. (Comic book writer Gail Simone famously created a site on the phenomenon called Women in Refrigerators.)

The new film, which takes place in 2019, takes a similar tack in a completely different story. Viewers barely meet Kelly’s pregnant wife, Pam, before she’s gunned down by Russian assassins, who also try to kill Kelly—apparently as payback for a recent mission in Aleppo, in which Kelly (played by Jordan) and his fellow SEALs killed several Russian operatives. The U.S. government wants to bury the whole matter, but Kelly, after recovering from what appears to be at least five gunshot wounds, is determined to find and kill the people who made him a widower. This initially lands him in prison but eventually leads to a secret mission to Russia, authorized by U.S. Secretary of Defense Thomas Clay (Pearce), in which Kelly is accompanied by his SEAL commanding officer, Karen Greer (Turner-Smith), and CIA agent Ritter (Bell).

There are a few twists and turns along the way, and a few nice set pieces, including a chaotic prison brawl and an impressive airplane crash. The movie is also blessedly free of lengthy descriptions of military tech. It does have some melodramatic dialogue, however, as when Kelly tells Greer, “They crossed the line. They brought their war to my house.…They’re going to play by my rules now. I’ll show them what a pawn can do to a king.” That pawn-king metaphor crops up a few more times, unfortunately, but director Stefano Sollima hardly displays the skill of a grandmaster; the film’s pacing is oddly slow, and the aforementioned Russia mission, after a major buildup, is surprisingly bland. And a revelation near the end will come as no surprise to seasoned genre fans.

All that said, Jordan executes his fight scenes with impressive flair, and Turner-Smith is very good as Kelly’s superior, who’s even tougher than he is. Pearce, in his few scenes, is consistently entertaining, and the film ends with a sequel hook for a movie version of Clancy’s 1998 bestseller, Rainbow Six, which is sure to please players of that book’s very popular video-game adaptation. Overall, though, viewers will probably find the tense Amazon Prime Video TV series Tom Clancy’s Jack Ryan, starring John Krasinski and Wendell Pierce, to be a more compelling spy-thriller experience—even though it, too, simply takes one of Clancy’s characters and spins its own yarn around him.