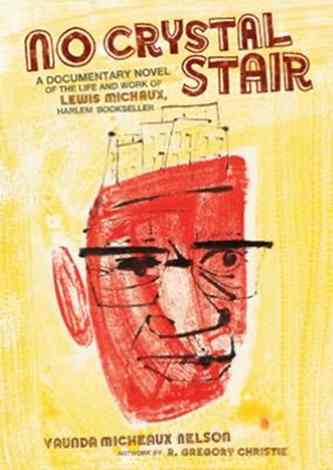 Coretta Scott King Award–winner Vaunda Micheaux Nelson didn't realize until she was an adult that the crowded Harlem bookstore her great uncle owned was one of the centers of the civil rights movement in New York City. Malcolm X., Muhammad Ali and Maya Angelou all visited it.

In No Crystal Stair: A Documentary Novel of the Life and Work of Lewis Michaux, Harlem Bookseller, illustrated by R. Gregory Christie, she delves into her own family's history, braiding together reminiscences, primary sources and the voices of composite characters to create a three-dimensional image of an extraordinary mover and shaker.

How did the story develop into its current form?

First of all, I didn’t really know the significance of the bookstore till I was in library school. People would see my name and ask me if I was related to the man who owned the bookstore in Harlem. People kept talking about it, and it dawned on me that it was something pretty important.

So I started just collecting information. I wasn’t thinking about writing a book at the time, I was just curious about my uncle. When I did finally start writing it, I wanted to do a biography. It wasn’t just the story of the bookstore—it was the story of a man who had a very interesting life.

I wrote a complete draft, but I realized very quickly that there were a lot of holes in it. A lot of the people who had information that I needed were long dead. I realized too, though, that even if I could fill in the gaps, it was dry. It didn’t feel like the story of anyone special. I wasn’t sure that anyone reading it would understand my uncle or the importance of the bookstore.

Around this time, I read Talkin’ About Bessie, by Nikki Grimes [and illustrated by E.B. Lewis], and then, a little later, I read Carver, by Marilyn Nelson. I was taken with the idea of hearing other people and what they had to say about an individual and how when you put those things together, you got not just what a person accomplished, but the spirit and the humanity of that person. I remember being just completely blown out of the water by that.

I thought about telling Lewis’ story that way, but in prose. And I knew then that doing that would turn it into fiction. I was afraid that doing that would make people take it less seriously, but I realized the only way I could do it, to bring him to life as a person, was to fictionalize it. I realized, too, that I could do a little bit of both, using as much factual information as I could and also doing some speculating and creating some characters based on the oral tradition, from stories of people who knew Lewis and the bookstore. That made it a lot more fun.

When did you first think of telling your uncle's story for kids?

I wasn’t sure, when I turned the story into fiction, who would buy it. Frankly, I didn’t think I’d ever sell it, that it would just be my private project. I just kept working away at it for years, just to have the family history.

When I got to the end of the draft, where it ends with Lewis Jr., I thought of making it a picture book, you know, with Lewis Jr. going to the store and meeting Muhammad Ali and so on. So I wrote it and sent it to my agent, and she sent it to Lerner. And my editor liked it and asked, had you ever thought of doing a book for teens?

So I ended up with a two-book contract! I’m going to start working on the picture book next.

Did it change the way you looked at your uncle, when you decided to turn him into a character? What was that like?

Yes, very much so. It enabled me to use so many of the wonderful quotes that I could not have created myself to show readers his personality, and I could place them in ways that would move the story forward. In a way, it was more like looking at the whole person.

Working on this book has made me a missionary about family history. It's so important that we talk to our parents and grandparents before it's too late.

One of Lewis' goals was to encourage people to learn about their past. If you don't know your past, it's harder to move forward. He felt that if black people could read and educate themselves, that it could change their lives in major ways. So here was this young person who in many ways was lost, and when he found his calling, he was able to save himself and so many other people, too.

How does your family feel about it?

They are ecstatic. But I have to say the joy of completing this project is a little dimmed, because my brother, Ed, who cared deeply about this project, passed away in 2009. My mother and my father too, and I'm sad about that. I know they would just be over the moon about this. All I can do is just feel that I did something they would be pleased with, and that has to be enough.

What was it like to do Freedom of Information Act requests for your uncle's FBI file?

I suspected the FBI had files, because of Lewis' relationship with Malcolm X so I tried to get them. First I got back letters saying there was nothing. Then I changed my request, changed the names a little bit, and I didn't hear back for long time. Then I finally got this package in the mail…

I loved finding out that he was on the "rabble-rouser list."

I'd never heard about Lewis Michaux before reading your book, and now I'm so glad I know him. Are you hoping to reach across the racial barrier with this book and reveal something to everyone about African-American history?

I don't really think about who I'm writing for when I'm telling a story. Obviously, I hope that people will get it and be moved. It's not just a book for me, but it's a book for other people to take in, too. But my goal isn't to cross racial lines. If that happens, I'm thrilled. I also hope it crosses over to adults.

He was mentioned in so many places. He was in The Autobiography of Malcolm X and in Maya Angelou's The Heart of a Woman and other places, so he hasn't been totally forgotten. But there was so much more to him and so much more going on in that store than people realize. It is part of our history. And it's important to get that out there.

But the main thing that drove me is that it's a story of an individual who was searching, who had a hard time as a young person. And he learned that reading, and reading about where he came from, was a good thing for him and might be a good thing for other African-Americans, too. That's what turned his life around. He was saved by reading. And that's the story I wanted to tell.

Vicky Smith is the Children's & Teen Editor at Kirkus.