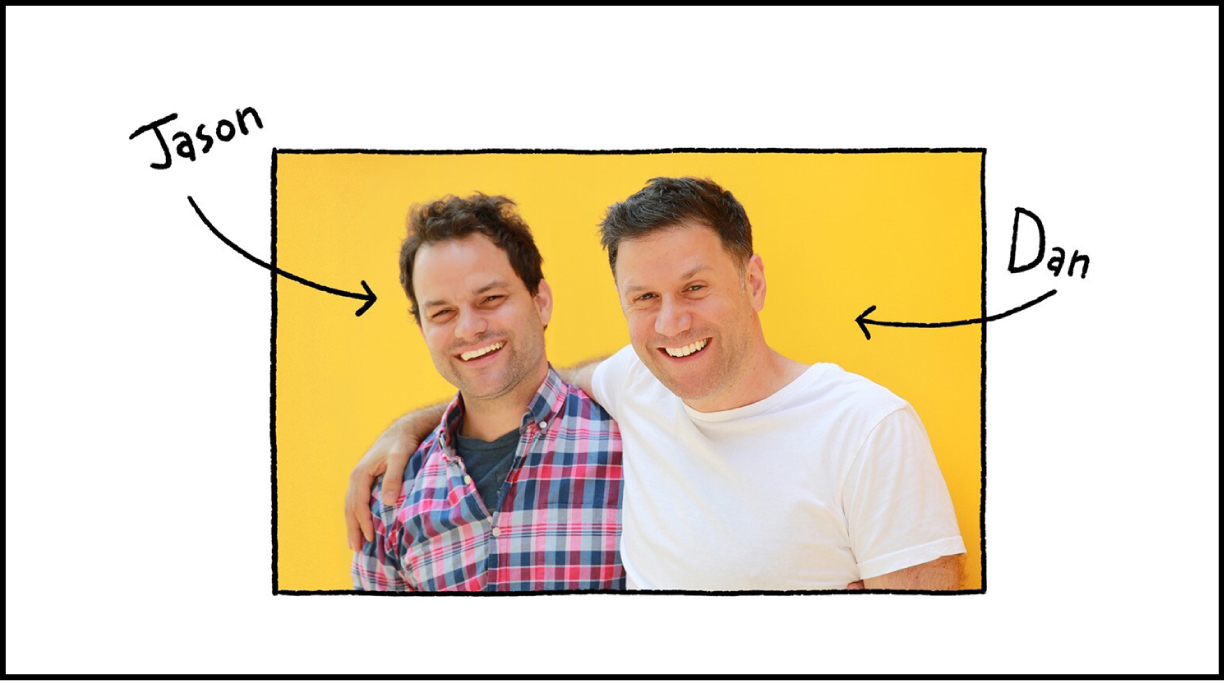 Don’t make Barb angry. You wouldn’t like her when she’s angry.

Actually, you definitely would—especially if you’re a young reader with a taste for action-packed comics, goofball characters, and off-kilter humor. Barb is the pint-sized hero of two graphic novels for kids from longtime friends and creative partners Dan Abdo and Jason Patterson: Barb the Last Berzerker, and the new Barb and the Ghost Blade (Simon & Schuster, May 31).

The books follow Barb as she tries to protect the land of Bailiwick from an evil demon with the help of a magical sword and a kindly, sausage-loving sidekick: Porkchop, a blue yeti.

Abdo, 44,  and Patterson, 45,  were working in animation when they had the idea for their defiant, curly-haired hero who hates taking orders and despises bullies.

That was the birth of Barb—as Abdo describes her, “a total badass. She’s really funny and she’s brave and she’s wild, but she’s also a hero. She really cares about doing the right thing.”

Barb made her first appearance in a self-published black-and-white zine that Abdo and Patterson wrote for fun. The comic helped flesh out the character and her distinctive way of speaking—she’s given to exclamations like “Rad!” and “Total drag!”

“Her language kind of breaks against the fantasy trope, where sometimes they talk in old English, you know?” Patterson says. “But this is more of a rock-and-roll fantasy world. It’s just kind of silly. I think silliness is an important part of what we’re always trying to bring to every page.”

Abdo and Patterson—self-described nerds—come by their love for silliness and adventure honestly. They met in high school in Montpelier, Vermont, where they quickly bonded over their shared interests.

“We were both big into art, and our high school had this independent art room, this little closet that you could go into and play music and draw and read comics and stuff like that,” Abdo says. “So Jason and I and a bunch of other nerds would go back there and draw and come up with comic stories and stuff. We started working together back then and just never stopped.”

They bring that youthful 1980s and ’90s energy to the Barb books, although it wasn’t necessarily intentional.

“We were big afternoon cartoon fans: He-Man, DuckTales, Teenage Mutant Ninja Turtles,” Abdo says. “We ate that stuff up. I think it was kind of subconscious, but we wanted kids who read Barb to have that same feeling of like, ‘I’m going to sit down and have an adventure. I’m going to have a session with these characters and it’s going to be fun and familiar and wild.’ ”

Abdo and Patterson were lucky enough to have a dedicated focus group for the Barb novels: their own kids, who offer feedback to their dads about their works in progress.

“I’ve got twin daughters, they’re 8,” Abdo says, “and they always have suggestions. They’re always like, ‘I think it should be like this,’ or ‘I’m not sure about this color.’ They’re full of critique, which I love. It’s great.”

Patterson’s son might have to wait a little longer, but there will be a third Barb book. And the duo is also preparing for their June launch of the fourth installment in their Blue, Barry & Pancakes series of early-reader graphic novels, which follow the friendship between a worm, a frog, and a bunny. The two projects are pretty different, but that doesn’t bother Abdo and Patterson.

“We’ll be really into Barb, and then a Blue, Barry & Pancakes deadline comes up, and it’s actually kind of like a nice breather,” Abdo says. “Let’s take a break from all sword fighting and heavy family drama and just do some straight-up silliness, because Blue, Barry & Pancakes [books] really lend themselves to just absurd, silly craziness.

They’re also preparing to meet some of their young fans in the coming months at both virtual and in-person events. They look back fondly to their recent appearance at the Tucson Festival of Books.

“If we could go back in time and tell ourselves that we got to go to a book festival and talk to kids, and then bring up a book that we actually made and get to sign it—it’s like we have to keep pinching ourselves,” Patterson says. “It’s a dream come true. Once kids read it, that’s when the story comes to life, when they get to read it and get excited about it. It’s absolutely amazing.”