When Your Alter Ego Is a Hedgehog 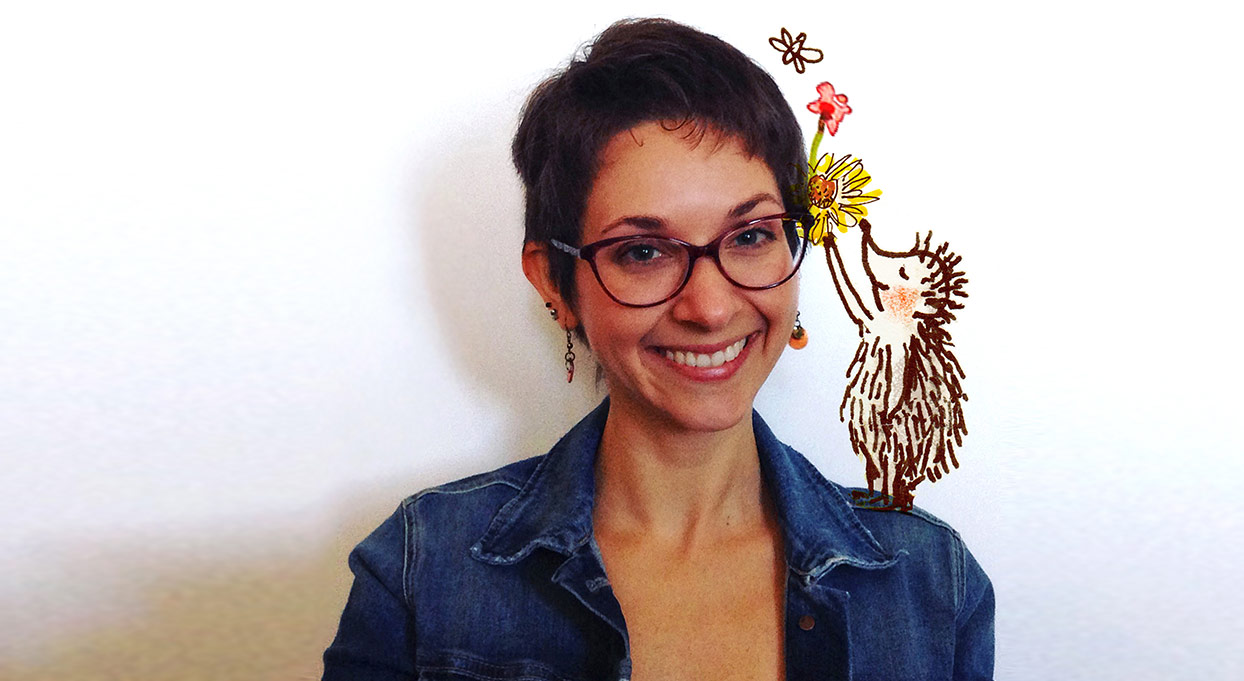 Lauren Castillo wowed the picture-book world with her illustrations for Emily Jenkins’ What Happens on Wednesdays (Farrar, Straus Giroux, 2007). Since then she has illustrated over a dozen books, some she’s also written, such as her Caldecott Honor–winning Nana in the City (Clarion, 2014), and many with text by others, including the 2019 Kirkus Prize finalist Imagine, by former U.S. Poet Laureate Juan Felipe Herrera (Candlewick, 2018). With Our Friend Hedgehog: The Story of Us (Knopf, May 5), Castillo steps away from picture books—or does she?—with a heavily illustrated chapter book about Hedgehog, who lives on an island in the middle of a river with her friend, Mutty, a white dog with “a chocolate-brown stitched nose.” One wild night, a storm picks Mutty up and swirls him away, launching Hedgehog on a quest that tests her courage and wins her friends she never imagined. Castillo spoke with me by phone from her home in Harrisburg, Pennsylvania, where she has put down roots after a peripatetic spell that involved not one, but two transcontinental moves.

You’ve made such a name for yourself as an illustrator and a creator of picture books. Where did the impulse to write a novel come from?

The character [of Hedgehog] came first. While I was bouncing around from place to place, I was drawing her kind of as myself and how I was making my way. And so she became my little alter ego character.

I had never developed a character first. My other picture books started out with an idea. So for Hedgehog it was like, “Oh, there’s this character and I don’t know what to do with her.” As she sat with me, I sat with her. I started to make the first dummy thinking that it would actually be a picture book. I sold it not actually knowing what the format of the story was going to be.

My editor, Katherine Harrison, was like, “Don’t put any limitations on yourself.” And so as we went back and forth with it, I realized that the language was less sparse than I usually write, because my picture books are supershort. And then as soon as [I heard] the words chapter book, I tensed up. Honestly, it was a little bit of a scary moment, because I was like, “Oh, I don’t write chapter books.” I had to let it evolve organically, and I would work on it a little bit every day.

I’m so happy that I ended up going in that direction because I absolutely loved it. I had such a blast. It felt really good to say, “Hey, I can make it look like this.” But also I want these characters to live on in a series, and I’m working on the second one now.

I think that you could call it a really long picture book, because it has that critical interaction between text and illustrations.

I like hearing that. That’s the sensibility I carried to this. Whether I tried to force it or not, it was probably going to come out this way anyway. The reason that I really love that this is labeled as a book for early readers is that I definitely had a little bit more difficulty as an early reader, and so I really relied on pictures, even in chapter books. Hopefully this is a book that beginning chapter-book readers will kind of cling to, and it’ll be a help for them as they’re moving on.

Will we ever find out if Mutty is sentient or not, or are you leaving it up to readers to decide on their own?

Yeah, it’s not said, just to let [kids] read into the character how they will. That’s specifically why I didn’t say “Hedgehog’s stuffed animal,” because that was truly Hedgehog’s only companion at first. And I didn’t want to downplay [that] at all. Also, Mutty is actually still my stuffed animal. We had to change him a little bit just so he would be his own character, but, yeah, Mutty very much was my comfort animal and, I guess, first best friend.

The other characters too. When I was developing them, I looked to what I knew around me. All the characters have a little bit of my own personality in them, but also Mole and Beaver are taken so much from my two dogs. And then my partner gets some of the qualities of Owl.

Is there anything else you’d like to say about the book?

I would like to say that it’s about friendship and bravery. But it’s also about making our own way in the world, finding our people. I liked that I was able to bring those pieces of my life journey into the story, so I hope it’ll continue that way. Hopefully my life doesn’t become too boring.