Banish Writer’s Block for Good with These 5 Cures 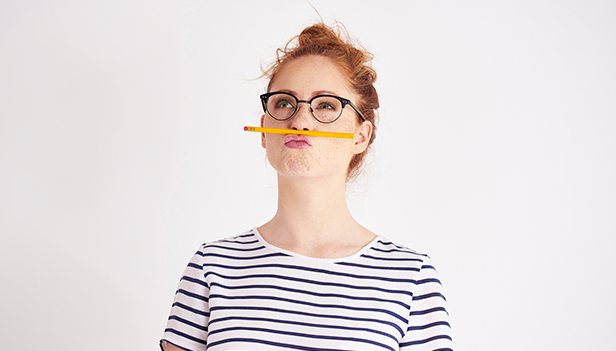 Ever sat down and stared numbly at a blank page on your computer screen or in your notebook?

You’re not alone. In fact, writer's block has affected some of the greatest authors in history. It can last a few hours, a few days, or even years. Reportedly Herman Melville—who wrote Moby-Dick, one of the greatest literary classics in the English language—stopped writing altogether because of it.

Psychologists have been studying the phenomenon for years. Some claim that it’s an issue with circadian rhythms, while others point to a discipline problem. Still others suggest that it’s a form of performance anxiety. Even so, there are authors who insist it doesn't exist. “There’s no such thing as writer’s block,” Terry Pratchett once said. “That was invented by people in California who couldn’t write.” (We're happy for those writers who never feel blocked, but we don't know many of them.)

When it comes to writer’s block, most authors and psychologists agree on one thing: it’s a mental block—not a creative one—and the antidotes are relatively simple. It’s just a matter of finding what works for you.

Here are our top tricks for breaking free of writer’s block.

1. Take a Break or a Breather

Sometimes hitting a mental wall is just an indication that you need to press pause on your writing. Hitting the panic button is a surefire way to block yourself up even further. So stand up and walk away from your writing for a little while. Give yourself permission to not fret or think about stopping, and do something else. Have a snack. Meet a friend for coffee. Refuel your artist's brain by enjoying something beautiful, like music or painting. Go outside and enjoy how the sky doesn’t have a ceiling. But then come back to your work.

Sometimes exercise is the best thing for a stoppered mind. Whether it’s going for a jog, cleaning your house, or even tackling the weeds in your garden, doing something physical has the uncanny ability to give your conscious mind something to concentrate on so your creative mind can relax and be productive. Not only is it what psychologists refer to as a form of “behavioral activation” (a kind of short-term coping strategy that can boost your mood), but exercise causes an actual neurochemical reaction in your brain that eases stress and depression. In short, exercise can be a quick pick-me-up and a chance to give your brain some love. Hint: bring a notebook. Chances are your brain will come up with some ideas when you least expect it.

3. Show Up, Even When the Muse Doesn’t

Schedule a regular time for writing every day. Ensure that it’s a time that works for you creatively—everyone has different times of day when their mind feels active—and commit to it daily. Making it a regular part of your day will not only take the stress off you but will allow you to keep those creative juices fresh. “Don’t wait for the muse,” Stephen King wrote in On Writing: A Memoir of the Craft. “As I’ve said, he’s a hardheaded guy who’s not susceptible to a lot of creative fluttering….Your job is to make sure the muse knows where you’re going to be every day from nine ’til noon, or seven ’til three. If he does know, I assure you that sooner or later he’ll start showing up.”

Sometimes fear can stop a writer dead in their tracks. Whether it’s fear of the writing not being good enough, fear of alienating friends and family (or editors), or even fear of success or failure, your mind has the ability to obsess over the worst possible scenarios. The best way to avoid this? By writing and pretending that no one else will ever see it—just writing for you. “All writing problems are psychological problems,” says Erica Jong in The New Writer’s Handbook 2007. “Blocks usually stem from the fear of being judged. If you imagine the world listening, you’ll never write a line. That’s why privacy is so important. You should write first drafts as if they will never be shown to anyone.”

5. Find Your Happy Place…and Write in It

The human mind has an amazing capacity to create its own reality. The moment you think, “I don’t like writing here,” your brain will note that for future reference. Once that happens, expect a flurry of “NOPE” whenever you try to settle down and write. So find a writing spot that brings you feelings of joy whenever you’re in it. Big windows, light, plants, lovely views, surrounded by books—anything that makes you feel calm and comfortable.

Cramming a tiny desk into a corner of the room or in your basement somewhere can also tell your brain that writing is not really a priority for you. If you don’t have the space or resources for a well-lit home office—or a cozy dedicated area to write in—think about places that inspire you. Libraries, coworking spaces, restaurant patios, and even public parks can offer light, space, quiet, and inspiration. “You need to find the environment and circumstance where you write best, and when you find that, embrace it,” psychologist Steven Pritzker says in an article from the American Psychological Association. “Pretty soon it will be a self-fulfilling prophecy.”